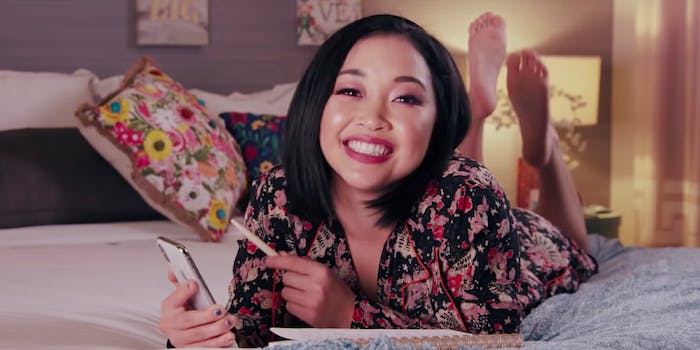 The teaser hints at a key character's return.

The rumors have floated around for a while now, but it’s finally official. Netflix is making a sequel to the internet favorite To All the Boys I’ve Loved Before, based on Jenny Han’s novel. Better yet, stars Lana Condor and Noah Centineo will reprise their roles as Lara and Peter.

The co-stars announced the sequel in an adorable video posted on Han’s Twitter. It crucially teased the return of a key character, John Ambrose McClaren, whose brief appearance was portrayed by Jordan Burtchett in the first film.

Netflix posted a letter to Twitter confirming the news. “I promise the next chapter will be worth the wait!” it reads.

No title’s been confirmed yet, but the sequel’s likely to be based on the second book in Han’s trilogy, P.S. I Still Love You. Netflix has also been mum on a release date, but that hasn’t stopped fans from losing their minds.

COVINSKY IS COMING BACK TO ME HELLO EXCELLENCE #ToAllTheBoysSequel pic.twitter.com/IMVo7L6HeN

sitting here wondering how we got so blessed with to all the boys I've loved before, and now how extremely blessed we are to have a a SECOND ONE. I'm one emotional mess rn #ToAllTheBoysSequel pic.twitter.com/6mzfKK6Iwd

Between the excitement, the teaser’s left fans with one question: Who’s going to play John Ambrose?

Wait they can’t do this to us and not release who is playing John Ambrose I mean this is made my fu****g month!!! So exited #ToAllTheBoysSequel pic.twitter.com/LO9RzIpR1u