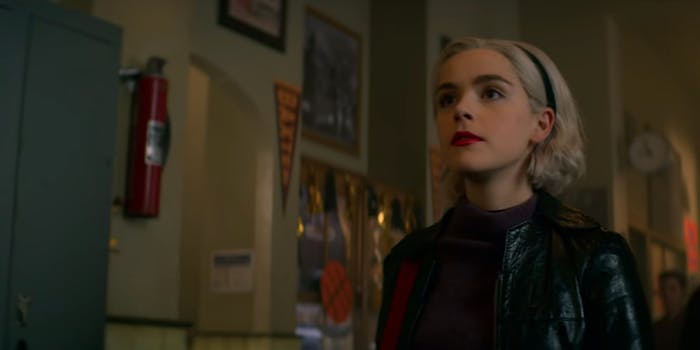 ‘Chilling Adventures of Sabrina’ renewed for seasons 3 and 4

The show has cast a spell on Netflix.

Netflix is apparently all in on the Chilling Adventures of Sabrina: It’s renewed the series through season 4.

Sabrina, an adaptation of the Archie comic that stars Kiernan Shipka as the titular teenage witch, only debuted in October but it’s already been gifted a holiday special and a second season (or Part 2) debuting in April. Parts 3 and 4, as they’re being called, will start production in 2019.

Show creator Roberto Aguirre-Sacasa, who also helms the CW’s Riverdale, said in a statement: “Praise Satan! I’m so grateful to my partners at Warner Brothers, Netflix, Berlanti Television, and Archie Productions for supporting this darker vision of the world’s most famous teen witch.”

There’s no word yet on whether there will be a Sabrina–Riverdale crossover event, but Aguirre-Sacasa recently told Entertainment Tonight that he’s “dreaming” of one, and Shipka said that while a merging of the two shows might be difficult, she thinks that maybe one Riverdale character could end up in Greendale: “I think Archie should just wander over to Greendale. Like, he goes on runs. He’s athletic. He can run into Greendale one day… Right? I honestly think that Archie hopping on over into our show would be awesome. My main pitch is always that… Forget the Gargoyle King! What is happening in the town over?”