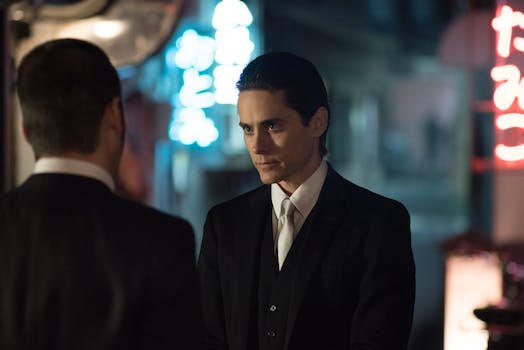 Don’t worry, Jared Leto’s yakuza movie is too terrible to be offensive

Netflix's 'The Outsider' is a stone-cold turkey.

There was a time when the words “Netflix’s Jared Leto yakuza movie” might not have been instant cause for panic. Only a few short years ago, we weren’t as aware of cultural appropriation in the media landscape, Netflix wasn’t weighing us down with an endless parade of original content, and people were less familiar with Leto’s, well, Jared Letoness. In 2018, however, it should come as no surprise that The Outsider, a new Netflix movie which stars Leto as an American G.I. in post-World War II Japan who rises through the ranks of the yakuza, is a disaster.

Perhaps the most surprising thing about The Outsider is that it actually gets off to a decent start. The film drops us in a Japanese prison and introduces us to Leto’s Nick with no explanation. In the first 10 minutes, Nick saves the life of a fellow prisoner, Kiyoshi (Tadanobu Asano), who tells him that if they can make it look like he attempted suicide, his “brothers” can get him out of the prison hospital and that they will come for Nick next. Nick and Kiyoshi follow through on this plan, at which point we arrive at a shockingly out of place title sequence.

Those first 10 minutes do a great job of setting up a world and character without any exposition. Based on this first sequence, you actually want to get to know Nick, to understand how he got in this prison, all information which the film seems to be making you work for. But what starts out as a sense of patience graduates into a feeling of bewilderment as we leave the intriguing setting of the prison, and finally learn via title card that we are in Osaka circa 1954. From there, Kiyoshi introduces Nick to his yakuza brethren, and as he climbs up the ladder of their organization, the movie becomes a mess.

Leto’s performance harkens back to 2011’s Drive, where Ryan Gosling plays a stoic getaway driver. In either role, Leto and Gosling portray silent men of action, capable of horrendous violence but supposedly not without principles. The trouble is that Leto is not quite the screen presence Gosling is, and director Martin Zandvliet is not quite the filmmaker Nicolas Winding Refn is.

Let’s forget for a second that Drive also had a better story, production design, cinematography, and music. The film works because Refn and Gosling created a character who was unforgettable in his unknowability. The more the Driver hid about himself, the more we wanted to know. Yet as The Outsider unfolds, it becomes clear that Nick is less a man with hidden depths and more a blank slate.

Leto has always had a certain magnetism, with his cold but boyish good looks. His blue eyes and chiseled cheeks are at once pretty and formidable. But somehow, there never seems to be much going on beneath the surface. With the exception of his admittedly transformative performance in Dallas Buyers Club, he has consistently failed to bring any kind of inner life to his recent performances, and never has this been more apparent than in The Outsider. Nick is so quiet and calm, it’s almost like he’s a robot. With the beard and Japanese prison garb he sports at the beginning of the movie, he’s a dead ringer for Niander Wallace, the similarly chilly villain he played in Blade Runner 2049—except The Outsider mercilessly spares us that character’s pseudo-philosophical jargon.

Zandvliet, who seems to be cribbing from the Refn playbook with the all the dark lighting and moody cinematography, does some nice work here. He builds a lot of tension which the film, unfortunately, fails to follow up on. But the issue with the storytelling goes beyond squandered potential. The screenplay from Andrew Baldwin (based on an idea by John Linson) is as wooden as Leto’s performance. Leaving it up to the audience to fill in information is one thing, but letting the movie unfold as a random series of events is another. From the minute Nick joins the yakuza, we’re led to believe that his difficult ascent up their hierarchy works simply because the movie says it does. Nicks’s journey doesn’t make sense though, and neither do the actions of anyone around him.

Take his relationship with Kiyoshi’s sister, Miyu (Shioli Kutsuna). Barely a sketch of a character herself, it’s unclear why she would fall for the tacit and withdrawn Nick at all, other than that the movie needs to give its lead character a romance. We’re supposed to find Nick compelling, despite his lack of defining characteristics or even recognizable human emotions, but The Outsider gives us no reason to get attached to him. It implies that Nick is a man of honor, but beyond the life-saving action which sets the movie in motion, all he does is savagely follow through on his orders and kill without remorse.

The violence in The Outsider has no redeeming merit, not only because it is gratuitous but because it’s pointless. Nick isn’t supposed to be a vicious sociopath, but he’s not the dark, avenging hero the movie wants him to be either. If anything, he’s an agent of pure chaos, and that possibility goes unexplored as well. This is epitomized by a scene in the latter half of the film when Nick runs into an old army buddy played by Emile Hirsch. As if the movie wasn’t bad enough already, having Hirsch, of all people, drop in out of nowhere to provide some out of the blue backstory is a terrible choice, especially when The Outsider has done everything it can up until this point to skirt Nick’s past. The sequence culminates in a burst of brutality as sickening as it is extraneous. It’s the flick in a nutshell: bloody, arbitrary, unnecessary.

While it makes sense for any movie about the yakuza to peak the interests of curious American audiences, using a white person as the way into this world is a tired cliche. Despite the movie’s cultural insensitivity, however, The Outsider is too dumb to be glaringly offensive. At least the movie gets a solid performance out of Asano, a well-known face in American and Japanese cinema for his work in films like the Thor franchise and Ichi the Killer.

The director of Ichi, the great Takashi Miike, was once slated to direct The Outsider, and who knows what the movie would’ve looked like under his guidance. Other actors too, such as Jeremy Renner, Michael Fassbender, and Tom Hardy were also at one point attached to the project. But none of that matters now, because the movie we get here is another bad Netflix film, so dull it almost makes one angry, so bland you’ll forget it the minute it’s over.