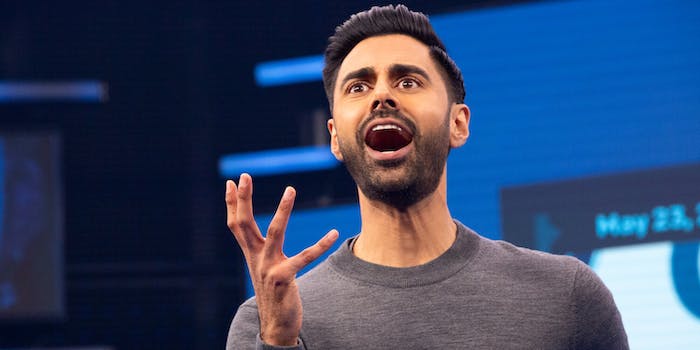 'We’re not trying to do ‘truth to power.’ We're trying to entertain.'

In recent months, Hollywood has taken heat for tiptoeing around Chinese censors regarding protests in Hong Kong. Now, a streaming giant has copped to bowing to the wishes of Saudi Arabia.

Netflix CEO Reed Hastings defended the company’s decision to pull an episode of Patriot Act with Hasan Minhaj that is critical of the country’s repressive regime.

“We’re not trying to do ‘truth to power.’ We’re trying to entertain,” Hastings said at Wednesday’s New York Times Dealbook Conference, per Deadline. “We can accomplish more by being entertainment and trying to influence the way people live, rather than being another news channel.”

Hastings also implied there are lines that “can’t be crossed,” such as censoring LGBTQ content. However, the CEO didn’t expound on that line.

Hastings pushed back a bit on the criticism, saying, “We can accomplish a lot more by being entertainment and influence the conversation about the way people live, rather than being another news channel.”

Patriot Act often tackles hot-button issues in the Middle East and Southeast Asia. Minhaj, who comes from an Indian Muslim family, focuses on issues in these regions that are often ignored or misunderstood by the mainstream American media.

The episode in question took aim at Saudi crown prince Mohammed Bin Salman for his involvement in the killing of journalist Jamal Khashoggi at the Saudi consulate in Istanbul, Turkey. Since the killing, Bin Salman has said, “I get all the responsibility because it happened under my watch.” Minhaj also jabbed at various Hollywood and D.C. figures who have bolstered Bin Salman despite his role in the assassination.

Netflix agreed to pull the episode after receiving a letter from the Saudi government claiming that the episode violated the country’s anti-cybercrime law.

Minhaj pushed back on the censorship in a February episode of Patriot Act, saying, “This isn’t about just censoring one episode of a TV show. It’s about the precedent… Because as tech companies keep expanding, they’re going to keep running into more vague censorship laws—laws that can allow governments to pull any content at any time.”