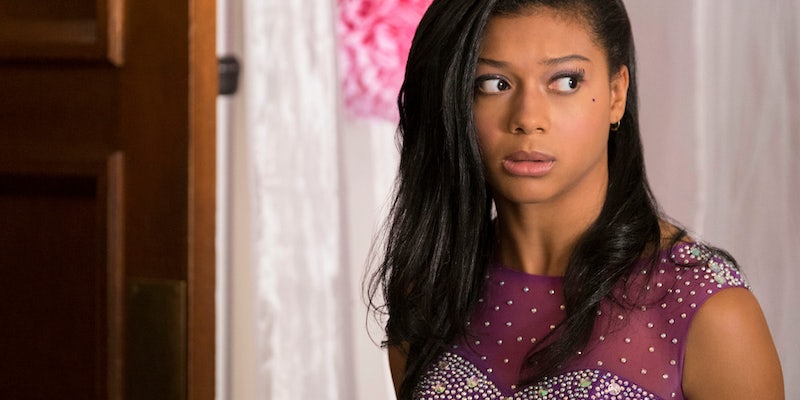 ‘On My Block’ is an important, messy high school dramedy

From the opening tracking shot, it's clear the Netflix series is aiming higher.

From the opening tracking shot that weaves its way through a party, stopping to pause on various teenagers making out, drinking, and smoking weed, only to finally land on three dorky eighth-graders watching the scene unfold from behind a fence, it’s clear that On My Block is aiming higher than your average high school show.

From Awkward.’s Lauren Iungerich and co-creators Jeremy Haft and Eddie Gonzalez, Netflix’s latest is a series about coming of age in a “rough neighborhood,” and all the implications that come with that loaded classification. The four leads, Cesar (Diego Tinoco), Monse (Sierra Capri), Jamal (Brett Gray), and Ruby (Jason Genao), are a close-knit group of friends who find their bond tested as they enter the uncharted waters of high school. Suddenly, the realities of everything from sexual attraction to gang violence are no longer ignorable, and On My Block mines them for drama and humor.

In its best moments, it evokes Iungerich’s own Awkward., and the way that show could juggle moments of absurdity with melancholy. It harkens back to Freaks and Geeks, and that series’ exploration of how high school is, for most of us, something to live through even in ideal circumstances. On My Block puts viewers smack dab in the middle of circumstances which are far from ideal, but relatable to almost anyone who went through the American education system.

It’s the balance of these disparate elements which makes On My Block worth a look. Consider an inside joke among the central friend group where they shout out “357!” or “44!” when they hear gunshots; it’s a small detail, but it goes a long way. On My Block acknowledges the sometimes harsh existence of its characters, but it never approaches “ghetto” voyeurism. The show is still about average high schoolers.

While On My Block doesn’t feel fetishizing, it doesn’t necessarily feel like a huge step forward for representation either. Iugerich, as you may have guessed, is about as white as you can get. But while she clearly seems to have the reigns here, the voices of the Black and brown characters are likely the product of insight from Haft and Gonzalez, who previously wrote on Gang Related and Empire, and last year penned the script for the Tupac Shakur biopic, All Eyez on Me.

The main focus of the first season is the central friends’ attempts to pull Cesar away from the gang that his recently paroled brother has pulled him into. There’s also a Goonies-esque plot about a stash of money stolen from a local roller rink which is inserted to give the series some momentum, in a way that’s typical of serialized, binge-inducing Netflix programming. This approach makes sense from a millennial-focused marketing perspective, though the show works best when it just lets these characters live their lives, rather than leaning too heavily into an extraneous plot.

The battle between authenticity and pandering happening in On My Block is visible. Lines like “my family crest is and always will be a gang sign” come off as overwhelmingly false; it’s clear this dialog might work in a writers’ room but it doesn’t ring true in any naturalistic context. Conversely, simpler touches, like the addition of one character whose parents got deported, are understated and heartbreaking in their sincerity.  The blend of lighthearted, fun TV tropes and the everyday struggle of real-life people of color that works so well on shows like Netflix’s own One Day at a Time (unfortunately on the chopping block, it appears) is more muddled here. Yet it’s hard not to feel there’s something vital about On My Block’s core premise.

A lot of the show’s problems also have nothing to do with the issues it’s exploring, and more with simple ease and execution. Like Showtime’s The Chi, its heart is in the right place but the results are stilted. Moments, where the kids are speaking in their own slang, are also halfway between clever and forced, like when they’re debating whether one of them is “strike-worthy,” which is a clunky joke about parole.

As for the kids themselves, I’m split on their actual performances and what they’re being asked to do. There’s a rawness to the cast which occasionally borders on unprofessional, but they’re all likable enough to get by. It’s the idiosyncrasies that the writers have given them which need some work. We’re told that Monse is a talented writer and Ruby is a math genius, but we rarely get to see these characteristics in action. And Jamal’s fear of telling his father that he quit the football team functions as more of a plot mechanism than anything else.

Essentially, it all comes back to that balancing act of authenticity and pandering. The soundtrack, for instance, is a perfect mix of indie and rap, including songs like “Parachute” by AM!R and “Boss” by Lil Pump. Gags like a pot-smoking grandma, on the other hand, are tired TV contrivances.

The kids of On My Block are up against some devastating challenges, but the secret the show knows is that when you’re in high school, all challenges appear devastating. When On My Block is able to navigate this complex range of emotions, it works. When the show doesn’t, it falls flat. But there’s a lot of potential here.