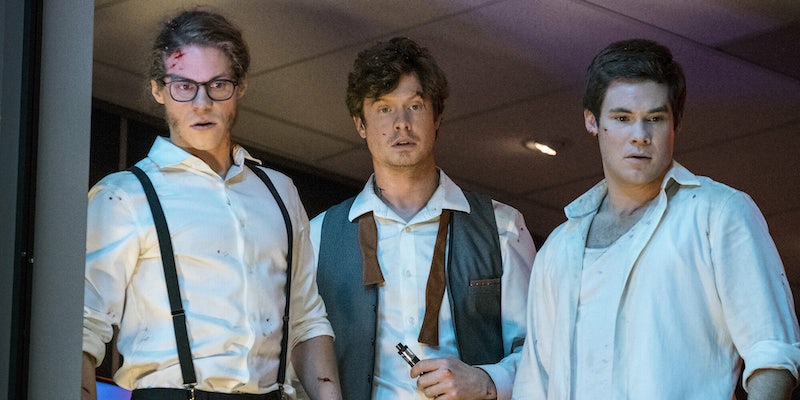 The 'Workaholics' trio makes no changes to its tried-and-true comedic formula for this Netflix carnival.

In hindsight, Workaholics might have been the worst thing that ever happened to Anders Holm, Blake Anderson, and Adam DeVine. Ever since the staggeringly vulgar slacker comedy launched in 2011, its three co-stars and co-creators have struggled to land successful roles outside their wheelhouse. (Look no further than DeVine’s failed attempt at being a rom-com leading man in last month’s dreadful Netflix original, When We First Met.) But Workaholics fans can rest assured knowing that, besides an inordinate amount of blood and gore, the trio’s new Netflix original movie, Game Over, Man!, makes virtually no changes to their tried-and-true comedic formula—for better and for worse.

Game Over, Man! opens with its three protagonists working as housekeepers at a swank Hollywood hotel. Holm plays Darren, a self-important control freak with a crippling salvia addiction; Anderson plays Joel, the self-conscious tech mastermind; and DeVine plays Alexxx, the blustery hotshot whose well-intentioned plans always fail spectacularly. (“XXX” may stand for poison, but Alexxx insists it stands for sexxx.) The three miserable goons, who refer to themselves as “the Dew’d Crew,” are tasked with readying the hotel for a massive party hosted by the Bey of Tunisia, a billionaire playboy and Instagram celebrity who loves talking shit and spending money frivolously.

Darren, Joel, and Alexxx use the opportunity to pitch Bey on one of their get-rich-quick schemes: the “Skintendo Joysuit,” a VR video game suit that allows the wearer to control the character in the game. (Hey, it’s better than Hot Tutors or the subscription-based Jeans Club.) Bey writes the guys a $200,000 check just to spite his assistant, Mr. Ahmad. But before the guys can bask in their new fortune, European terrorists overtake the hotel, holding party guests hostage until Bey coughs up $500 million.

Suddenly, it’s up to the Dew’d Crew to save all the hotel guests from being blown to smithereens. Sound familiar? Ta-da! Game Over, Man! is Die Hard if you made John McClane a clumsy vape fiend and the villains used severed male appendages as weapons instead of machine guns. In case the Dew’d Crew’s failed attempt to hide in the elevator shaft didn’t make the homage obvious enough, Sam Richardson’s security hacker character quips, “Well, you didn’t bring me along cause I look like the black nerd from Die Hard.”

Truth be told, some of the fight scenes are actually pretty funny, particularly the one in which Alexxx pretends to be a victim of auto-erotic asphyxia to distract two henchmen who turn out to be lovers, giving Darren and Joel time to bash their skulls in with lamps. But that deeply disturbing last sentence also sums up the scope of the humor found in Game Over, Man! Holm, Anderson, and DeVine crank out as many jokes as possible about buttholes, gay people, and workplace sexism and try to turn them into a 100-minute movie. It’s no wonder Jackass alum Steve-O makes a cameo as himself.

Still, Game Over, Man! works best when it’s not trying to be even remotely deep. There’s a strange minor plotline involving fellow hotel employee Cassie (played by Aya Cash, whose hysterical, self-righteous anger is always a pleasure to watch), who endures her boss’ rampant sexism in the hopes of getting a promotion. Erma, another villain, takes pity on Cassie and tells her, “You don’t ask for respect, little girl. You take it.” This brief feminist glimmer might be more effective if Erma didn’t turn around and use a homophobic slur as she mercilessly beats Joel’s ass in the movie’s third act.

Ultimately, these critiques don’t matter, because Game Over, Man! will change virtually zero people’s opinions of Holm, Anderson, and DeVine’s brand of gross-out humor. Workaholics fans will likely submit themselves to the wildly inconsistent, occasionally funny ride out of loyalty, and skeptics will have no reason to turn it on in the first place. If anything, the creators of Game Over, Man! deserve props for fully utilizing the freedom that comes with being a Netflix original to make a movie as nauseatingly crude as possible, quality be damned. How much you enjoy it depends on the juvenile depths to which you’re willing to stoop.