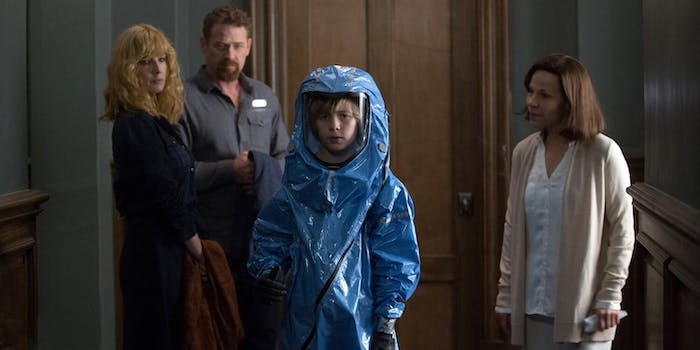 The ending to Netflix’s ‘Eli’ has divided viewers

Some loved it, some were confused by it, and some called it the 'worst ever.'

Netflix has an interesting predicament regarding its new original horror flick, Eli: Many viewers hate the ending.

On Friday, Netflix dropped Eli, a film centered around a child with a rare autoimmune disease who can see a young ghost. Eli lives in a bubble, and his parents take him to see Dr. Horn (Lili Taylor), who maintains he can be cured via an intensive treatment plan. Eli begins seeing the ghost of a young girl soon after beginning treatment, initially believing the spirit is evil. However, he learns she’s trying to help him escape the malicious Dr. Horn’s torturous treatment.

Near the end of the film, the truth about Eli comes out: He’s the son of the devil. Eli’s mother used the disease as cover for the reality that he’s the son of Lucifer—who told her that Dr. Horn’s treatment would “cure” Eli.

After realizing his truth, Eli snaps out of his own exorcism and kills his human father, along with all the doctors and nurses present. He soon discovers that his neighbor, Haley (Stranger Things‘ Sadie Sink), is also a devil child, which helps him deal with his new life.

Unsurprisingly, viewers had a lot to say about this “bait and switch” ending. Some folks loved the twist, some were confused by it, and others still deemed the movie’s final act the “worst ever.”

Of course, Netflix likely knew exactly what it had in Eli and achieved the desired outcome–getting people to talk about it. And, as they do, fans went to Twitter to vent.

When I got towards the end of Eli on netflix. #EliNetflix #Netflix pic.twitter.com/M4bstw9J6D

“The ending was shockingly bad. What an absolute waste of time,” wrote one spectator. In another negative tweet: “That ending what the fuck…….that’s 2 hours of my life I’m never gonna get back.”

I’ve just sat through Eli, the new Netflix horror and it was actually pretty good until the end. The ending was shockingly bad. What an absolute waste of time, I’m fuming

Others, however, enjoyed the twist or at least felt the film was worth visiting.

“The writers must have done HELLA drugs towards the end of writing the script because the last 20 minutes are a rollercoaster of batshit insanity!” one user wrote.

Netflix’s #Eli is absolutely bonkers. Starts off as your stereotypical bubble boy meets haunted house with evil spirits thrown in. But the writers must have done HELLA drugs towards the end of writing the script because the last 20 minutes are a rollercoaster of batshit insanity! pic.twitter.com/CVFbVAhW6P

Another praised its “sumpah power storyline” and gave it five stars.

Many concluded that Eli‘s twist was, at the very least, unexpected, putting a clever spin on the haunted house movie format.

So I saw this movie on Netflix called Eli. Started out with a pretty good haunted house hook, but that ending…

Holy shit, I did not see that ending coming 😶 No spoilers, but I recommend it if you wanna watch something this Halloween.

Eli leveled many viewers, leaving them in sheer shock.

Me watching the eli netflix movie and it completely switches storylines the last 20 min of the movie pic.twitter.com/WR5lBIi3nY

Watched Eli on Netflix. Fairly standard ghost story, but still pretty well made. And then a ridiculous twist that had me like… pic.twitter.com/rGdVkNtDbg

Still, many were upset or left unimpressed. “My time has been wasted and my night has been ruined,” one user lamented.

I just watched Eli on Netflix and I was so hyped up for a new horror movie and it just about had the worst ending I've ever seen. My time has been wasted and my night has been ruined pic.twitter.com/vHnAJJCp83

“Netflix movies usually bang but Wtf was ‘Eli’…..worst ending to a movie ever, was disgustingly bad,” wrote one user in a decidedly sunny description of Netflix originals.

Netflix movies usually bang but Wtf was ‘Eli’…..worst ending to a movie ever, was disgustingly bad 😂😂

“Oh God, I hate Netflix. #EliNetflix was making sense then suddenly it became about a possessed devil child and now it’s a comedy,” another wrote. “Wtf! I deserved better than this shit… Eli was a fucking fire bender.”

Oh God, I hate Netflix. #EliNetflix was making sense then suddenly it became about a possessed devil child and now it’s a comedy. Wtf! I deserved better than this shit… Eli was a fucking fire bender.

No matter how viewers felt about the film, the best explanation comes from Cool Slim (@ayye_pap):