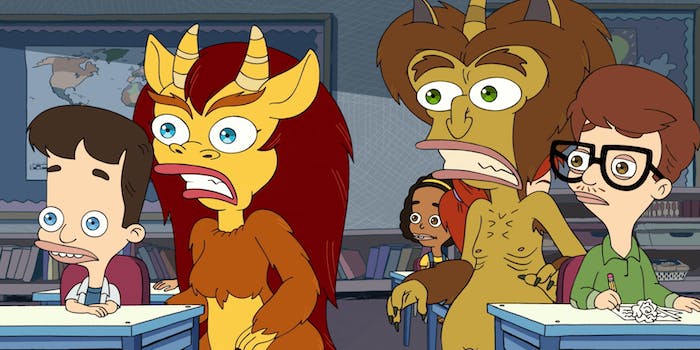 A Hormone Monsters focused spinoff is headed to the streamer.

As season 3 of the critically adored animated series drops, Netflix has announced a spinoff that will likely give Hormone Monsters the limelight.

Human Resources is the title of the next show in the Big Mouth cinematic universe. Judging by the brief teaser released Friday, it looks like the animated series will focus on the Hormone Monsters who both help and hinder the children of Big Mouth. The teaser appears to take place in the realm where the monsters live when they aren’t haunting and/or helping their human assignments.

The “Human Resources” department where the Hormone Monsters live when not lurking on Earth was featured briefly in season 2 of Big Mouth. Though a land where the monsters live has been hinted at briefly, between those moments and the teaser, we still don’t have many clues for what this world will look like.

Big Mouth follows a group of middle schoolers as they adjust to the challenges of puberty. On the show, the changes of pubescence are embodied by the Hormone Monsters, who are played by Nick Kroll, Fred Armisen, Maya Rudolph, and others.

Netflix has already signaled its faith in Big Mouth and its creators, ordering a total of six seasons of the series and inking the creative team to an overall deal.

Though the teaser appeared on Twitter on Thursday afternoon, the clip debuted at the Big Mouth panel at New York Comic Con earlier that day.

TV Line reports that a number of the minds behind Big Mouth, including Kroll, Andrew Goldberg, Mark Levin, Jennifer Flackett, and Kelly Galuska will work on the spinoff.