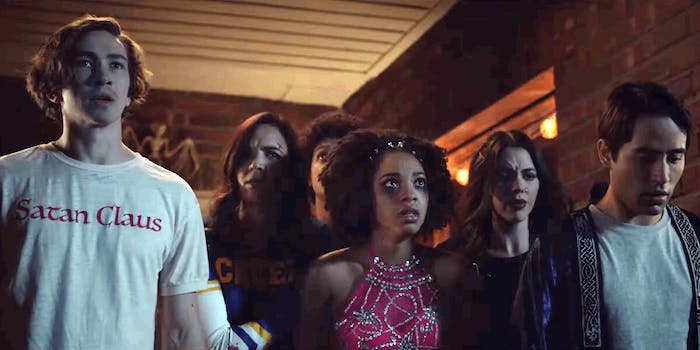 ‘Into the Dark: Uncanny Annie’ is far from spooktacular

Season 2 of 'Into the Dark' gets off to a lackluster start.

Into the Dark closed out its first season on a high note with Pure. Unfortunately, that momentum does not carry over to the horror anthology’s second year, as the series kicks off October with the lethargic, supernatural snoozefest Into the Dark: Uncanny Annie.

Into the Dark: Uncanny Annie

RELEASE DATE: 10/4/2019
DIRECTOR: Paul Davis
STREAMING: Hulu
Halloween goes haywire for a group of friends when the board game they play comes to life.

Into the Dark has been a bumpy ride up to this point, but the high points have been entertaining enough to keep me coming back. That’s inherent to the anthology format, and the sense of the unknown that comes with each new entry is the series’ biggest selling point. But Uncanny Annie sets a new low for Into the Dark, as nearly every aspect of this movie is inert. Into the Dark has delivered some clunkers, but this is the first one that’s bummed me out.

The setup for Uncanny Annie is simple. A group of friends are hanging out on Halloween, and the air is full of tension—some sexual, some not. There’s a couple, Michael and Wendy (Dylan Arnold and Adelaide Kane); a former couple, Eve and Craig (Georgie Flores and Jacques Colimon); the nerdy guy, Peter (Evan Bittencourt); and the new-ish girl, Grace (Paige McGhee). One of the things Uncanny Annie does well is balance the group dynamic. Credit the actors for bringing some life to thin characters. They capture the uniquely late-teens/early-twenties sensation that a shared look can turn into something more. In adulthood, those moments come spiked with a mix of loneliness and desperation. But for these kids, there’s a fragile air of optimism. That hopefulness is fleeting, and it’s the last time these friends will have it.

At first glance, the friends appear set for a night of fun. They have a house all to themselves, more beer is en route via Postmates, and the ratio of guys to gals is just right. The only downer about the night is the reason they’re gathering: to commemorate the first anniversary of their friend Tony’s death. They decide to quell the awkwardness by playing a board game called Uncanny Annie. Given the somber occasion and spooky time of year, the game obviously has a Jumanji-like effect where the stakes become real. Once conjured, Annie and the game terrorize the group by forcing them to reveal secrets and do things they don’t want to do. You know how it goes.

No game of “Never Have I Ever” or “Truth or Dare?” has ever ended well, in real life or in the movies. They’re meant to provoke and force people into corners, only to reveal things they likely aren’t emotionally equipped to handle. Yet whatever version of these games you’ve been a part of is certainly more terrifying than Uncanny Annie. Once secrets start coming to light and people start dying, Uncanny Annie bottoms out creatively, sagging under Alan and James Bachelor’s lifeless screenplay. The Annie mythology is half-baked and largely pointless. Worst of all, the story doesn’t give us any reason to care about the fate of this group of friends.

Generally, I love the gimmick of a movie taking place in real time. It’s an interesting creative challenge, and those films have an immediacy that propels them. Consider the Unfriended films, which start with a gimmicky premise and quickly expand their thematic scope. Restricting themselves to showing viewers only what is on their computer (or other screens) breeds ingenuity. The Unfriended films turn their limitations into strengths. Uncanny Annie does not. It feels like the story takes the path of least resistance to get to the finish line. The compressed timeframe also hurts the characters, because it’s difficult to work a character arc into 80 minutes. The whole things feels stale.

Uncanny Annie marks Paul Davis’ second Into the Dark installment, following last October’s lifeless The Body. After delivering the two worst entries in the series, I may have to skip any future Davis-directed Into the Dark films. That said, he does deserve credit for one smart recurring bit in Uncanny Annie. Characters jump back in their memories, and Davis puts them in spaces cloaked in darkness, save for another person or object. The most effective of these is when Michael goes back to the night of Tony’s death. It’s a nice touch that makes you realize how lacking the rest of the film is.

The first episode of Into the Dark season 2 sets the bar low enough for the rest of the season to clear it, which gives me hope that things will pick up next month. Every Halloween season, I look forward to bestowing the highly coveted label of “spooktacular” upon new horror releases. Obviously, Into the Dark: Uncanny Annie is not spooktacular. Skip this trick and treat yourself to something better.