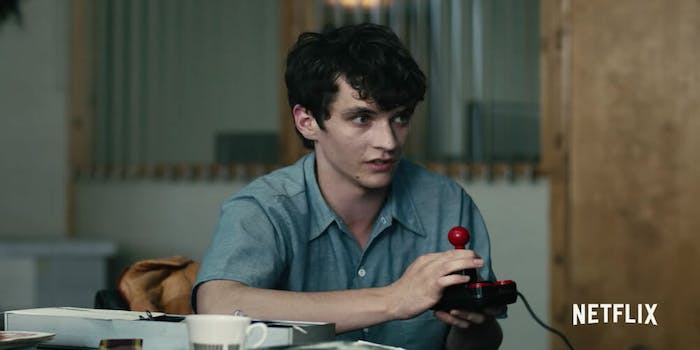 'We've been left with no other option.'

A children’s book publisher is suing Netflix over its film Black Mirror: Bandersnatch and its use of the phrase “Choose Your Own Adventure,” according to the Hollywood Reporter.

The plaintiff, Chooseco, LLC, owns the trademark to “Choose Your Own Adventure.”

“Netflix has no license or authorization to use any Chooseco trademark,” reads the complaint, which was filed Friday in federal court in Vermont. Chooseco is seeking at least $25 million, which was called a “conservative initial estimate” in the complaint.

Chooseco and Netflix had been involved in negotiations for a number of years, but Netflix ultimately was not granted a license to the trademarked phrase. Chooseco had even sent a cease and desist asking Netflix to stop using the “Choose Your Own Adventure” mark, according to the complaint.

The complaint specifically refers to one scene in Black Mirror: Bandersnatch where the main character mentions a fictional “Choose Your Own Adventure” book.

According to a Chooseco press release, the publisher sold more than 250 million Choose Your Own Adventure books between 1978 and 1998. Chooseco claims Netflix’s film contains scenes of “extreme physical violence, murder, drug use and a choice about the death of a child,” which is something it does not wish its books be associated with.

“Chooseco promotes literacy and adventure, good decision and choice making and providing appropriate content for our demographic’s age range,” a spokesperson for the publisher told the Daily Dot in an email. “The misappropriation of the trademark without permission puts Chooseco in a difficult situation as the graphic and offensive nature of the content is particularly damaging for fans of the series young and old, and tarnishes the mark.”

The “Choose Your Own Adventure” brand is targeted towards children aged 7 to 14-years-old, the spokesperson said.

“We would prefer not to resort to litigation, but given the damage that we will suffer as a result of the use of our mark we’ve been left with no other option,” Chooseco co-founder and publisher Shannon Gilligan said in a press release.