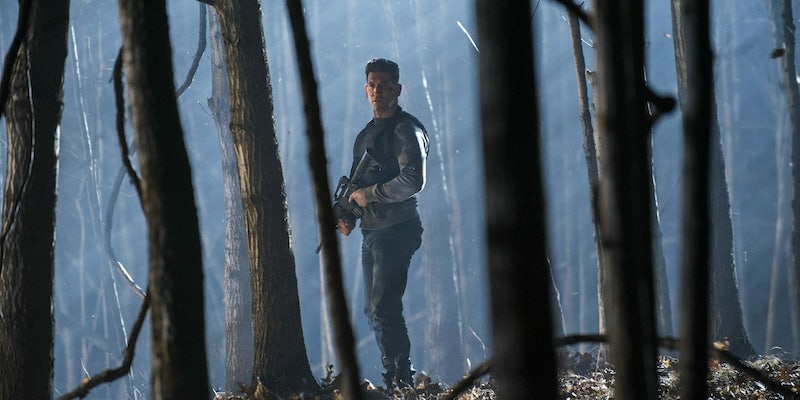 This review includes no major spoilers for The Punisher season 2.

Frank Castle remains one of Marvel’s most controversial characters, and in season 2 of The Punisher, Netflix is evidently trying to play it safe. The ultra-violent fight scenes are still there, but the show has dialed back the half-assed political commentary we saw in season 1, focusing instead on the personal conflict between Castle (Jon Bernthal) and his amnesiac nemesis Billy Russo (Ben Barnes).

RELEASE DATE: 1/18/2019
DIRECTOR: Various
STREAMING: Netflix
‘The Punisher’ is still slow-moving and politically confused in season 2, where Frank Castle gets a teen grifter sidekick and goes up against amnesiac villain Billy Russo.

The end result is a slow-moving story that tries to balance several contradictory conceits. It stars a homicidal vigilante who in real life is popular among cops and soldiers, yet was described by his co-creator as “fundamentally a critique of the justice system.” (Some of the more worrying IRL examples include the Punisher logo being combined with Blue Lives Matter slogans and worn by white supremacists.) At the same time, the show wants to tell an authentic story about veterans navigating PTSD and civilian life, featuring real veterans onscreen and behind the scenes. It also shies away from explicit commentary on class, race, or gender, avoiding the racist reputation of U.S. law enforcement by casting a Black man to represent the NYPD and an Iranian-American woman to represent the Department of Homeland Security.

On top of all this, The Punisher tries to portray Frank Castle both as a relatable antihero and an out-of-control killer. It isn’t morally ambiguous so much as morally and politically confused, whereas the best Punisher comics are the ones that bring Frank Castle’s dark side to the forefront. This fence-sitting attitude does little to make The Punisher stand out among the many action thrillers on the market.

Although, really, is Netflix’s Punisher a thriller? Certainly not in terms of pacing. Like the rest of the Defenders franchise, the episodes feel too long and the main plot meanders around regular doses of filler. Jon Bernthal is still excellent, intimidating and sympathetic by turns, but the ensemble cast is unlikely to grab your attention. What, exactly, are we here for? Is it really necessary to sit through so many laborious dialogue scenes with little emotional payoff? Wouldn’t it be better as an action-focused story about Frank Castle and his addiction to violence, like John Wick with more emotional insight? It’s also odd to see how seriously The Punisher takes itself when handling Castle and DHS agent Dinah Madani (Amber Rose Revah), when Russo gets such a silly origin story for his supervillain persona Jigsaw.

With Castle’s original revenge plot out of the way, season 2 offers two new storylines: Billy Russo losing his memory after the big showdown last season, and Castle’s unlikely partnership with teen grifter Amy Bendix (Georgia Whigham), a girl fleeing a ruthless Christian fundamentalist (Josh Stewart). Amy is a welcome addition because her eye-rolling attitude balances out Castle’s intensity, but Russo’s story belongs in a much trashier (and possibly more entertaining) show. Not only does it rely on an egregious example of a Sexy TV Psychiatrist, but it doesn’t really make sense.

After shooting a DHS agent in the head and committing a laundry list of felonies last season, wouldn’t Russo be in prison or a secure psychiatric facility? Is it really plausible that the U.S. government sprung for low-security medical treatment, with Russo getting regular one-on-one therapy sessions and seemingly not standing trial? His therapist, Krista Dumont (Fiorina Lima), spends far too long as a stereotypical attractive young doctor who attaches herself to a damaged patient, providing unlimited emotional labor for a violent killer. Once Russo escapes the hospital (which really isn’t a spoiler, come on), it feels like he’s conveniently only being pursued by one cop (Brett Mahoney, the Defenders’ version of Commissioner Gordon) instead of the city-wide manhunt that’s allegedly taking place.

With Daredevil, Iron Fist and Luke Cage all cancelled, this is surely Punisher’s final season. I’m glad that Jon Bernthal will soon be free to do something more interesting, but it’s still disappointing that Punisher didn’t live up to his talents. Bernthal was the highlight of Daredevil season 2 and is consistently the best part of his solo show, where the supporting subplots often feel like a waste of time.

Like any long-running comic book character, there are a variety of ways to interpret Frank Castle. Bernthal’s version is, for want of a better term, a “nice” Punisher. He’s still a fundamentally warped individual, but he’s friendly to kids and vulnerable civilians, and he knows how to be reassuring in an emergency. Rather than just being a dead-eyed killer, he’s able to engage with friends and allies. Bernthal also understands the physicality of a guy who knows exactly how dangerous he is, best illustrated in the first couple episodes this season. Castle begins on a relatively even keel, traveling under an assumed name. He’s quiet and respectful to women, but not afraid to start a bar fight if some creep misbehaves. He’s a recognizably real person, which is more than can be said for some of his co-stars.

It helps that Bernthal looks like a more believable brawler than other superhero actors with underwear model physiques, but mostly it’s about attitude. He’s got swagger, but he visibly keeps his violence in check, fully aware of how far he might go. Once Castle is actually invested in a fight, he’s terrifyingly singleminded, resulting in some brutal action scenes that combine well-characterized choreography with horrific injuries. Hence why Amy Bendix was such a smart addition this season: we need a civilian outlook. Familiar with the blood and macho grit of R-rated action thrillers, we need someone to react with realistic terror and disbelief, jolting the audience out of its complacency.

After 11 seasons of Marvel’s Netflix franchise, fans know what to expect. The Punisher offers decent action scenes and a great lead actor, and the same level of okay-to-boring crime drama storytelling we’ve seen throughout the franchise. If you enjoyed season 1 you’ll be perfectly happy with this addition, but it doesn’t do anything interesting with a character who should feel more relevant to our current political climate.