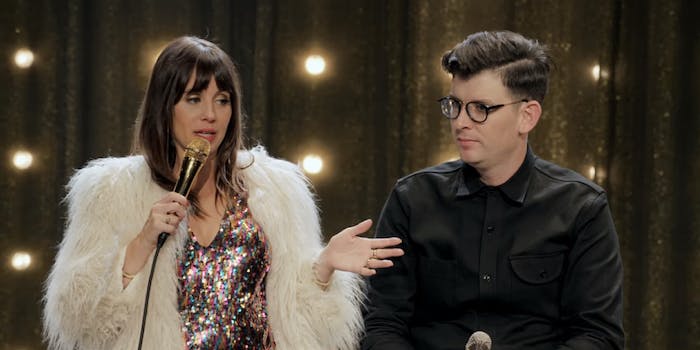 The comedians find a perfect union in the Netflix special.

In The Honeymoon Stand Up Special, Natasha Leggero and Moshe Kasher document a moment where comedy-as-therapy has a couple of different interpretations.

Comedians Leggero (Neighbors, Dice) and Kasher (Another Period, This Close) were married in October 2015 and turned their honeymoon into “The Honeymoon Tour,” in which they attempted to help other couples or newlyweds with their problems. They had a daughter in February, and Kasher jests that before Craigslist shut down its personal ads, they found someone via Casual Encounters to watch her, so she won’t be screaming through the interview.

“We’re not native or natural parents,” Kasher tells the Daily Dot. “We’re figuring it out ourselves, which I think you can tell in the special.”

The three-part special, taped in Austin, Texas, in November, finds the couple musing on impending parenthood as well as the extended honeymoon phase of their marriage, their upbringings, and Leggero’s conversion to Judaism. After individual sets by Leggero and Kasher, they reconvene for the third act of the show, which involves them roasting couples as a (very informal) form of therapy.

Leggero came up with the idea for the tour in part because she didn’t want to be on the road by herself anymore, but she was also inspired by some historical research she did for Comedy Central series Another Period in Newport, Rhode Island; specifically about a wealthy couple who went on a 10-year honeymoon and returned with four kids. Kasher says the third part of the special functions as a way to get in some more laughs, but Leggero says she had a desire to actually try to help people with their issues.

“Sometimes we see people who should definitely not be together,” says Leggero, “and it’s very obvious.” However, past roasting subjects have tweeted her that they’ve gotten married (and divorced).

“The one thing about therapy and couples’ therapy, not that we’re couples’ therapists, obviously, but it does work as a catalyst for whatever is going to happen,” says Leggero. “Getting up onstage and telling people in public what the problem is in your relationship, it doesn’t have zero effect.”

Leggero and Kasher are still working through their own issues onstage. In her set, Leggero says she was apprehensive about motherhood but she balances it out by thinking about her legacy: “Someone’s got to grow up and call Kylie Jenner’s kid a whore.” Kasher discusses being a teenage boy and going sex-toy shopping with his mom (who is deaf) in aggressive detail, and dissects what really happens at a fertility clinic. Before Leggero’s set, the two argue about who should go first before he’s reminded she’s more famous.

One of the highlights of Leggero’s set is a bit about last fall’s flood of sexual harassment allegations in Hollywood. “Women got all the power so fast,” she says in the special. She pokes fun at herself, lamenting how the men who’ve harassed her aren’t famous enough to get in trouble. (In January, she told Jimmy Kimmel about director James Toback harassing her.) Leggero then asks how many women in the audience have seen a man masturbate in public. A lot of hands go up, and Leggero travels around to ask women about their stories, accompanied by somber piano music. She says she was surprised by how many hands she’d always see, and men would often approach her after the show to claim they had no idea this happened so often.

“A woman would never do that, which is what I try to talk about in the joke,” Leggero says. “And women should do it, it’s less clean up.”

Kasher says that as new parents, they’ve been practicing “performative chillness,” but they don’t seem worried about edges softening. “That’s what comedy is, reacting to your surroundings,” says Leggero. “Hopefully in a way other people can relate to.” So will they be going to Burning Man this year, as they have in years past?

“I don’t think the baby’s ready for her first major desert festival,” says Kasher. “I’m still trying to figure out if I should go just for two days, just to get a little freedom from this self-imposed prison I call my family.”