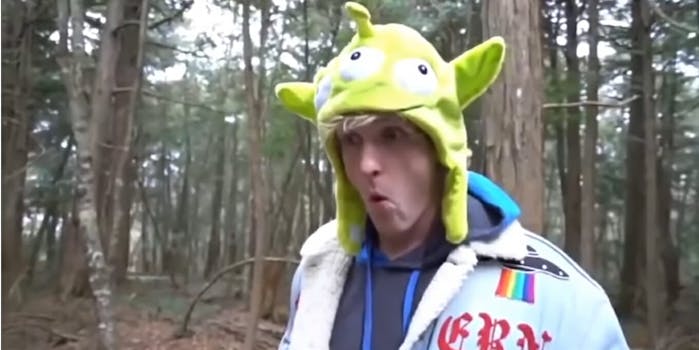 This Logan Paul mural has understandably riled up residents

A controversial depiction of the YouTube star stirs up neighbors.

A mural in Los Angeles’ Echo Park neighborhood is sparking controversy. The mural depicts a hanged man wearing the same attire donned by prominent YouTuber Logan Paul the day he filmed his controversial video in the Japanese suicide forest.

In early January 2018, Paul uploaded a video of himself and a gang of friends on vacation in Japan where he stumbled on a man who had apparently died by suicide. It wasn’t a livestream, but rather an edited video he and his team had time to think better of. In it, he dons a Toy Story hat and a denim jacket with large red writing on the chest and arms and a rainbow UFO patch on the right breast, before heading into Aokigahara, a national park near Mt. Fuji. The outfit is undeniably similar to the clothing worn by the figure in the mural.

Residents can see the mural opposite the Echo Park Lake. One woman told KTLA that she believes the mural to be anti-LGBTQ. “I immediately knew what it was for because I saw the pride flag on his shirt, so I immediately knew it was directed at LGBT community and that was heartbreaking,” Buffy Winkler said.

For those unfamiliar with Paul, it’s an understandable interpretation that the mural is a warning to the LGBTQ community. But it is likely a nod to the fact that Paul recently told his followers that he was “going gay” as part of a social media stunt. (It also led to social media backlash.)

“I feel like it is a pretty safe bet to say that’s what the mural was about,” DeFranco said in a video. “I just don’t think that it makes sense, given the blatantly obvious evidence with this situation for there to be any water given to the argument that this is an attack on the LGBT community.”

An Instagram post from Jan. 29 indicates that the mural has been up for longer, however, and gives credit for the art to @ihatestencils. Los Angeles police told KTLA they have yet to receive any complaints about the mural. People are awaiting a response from Paul, but he has not yet commented.