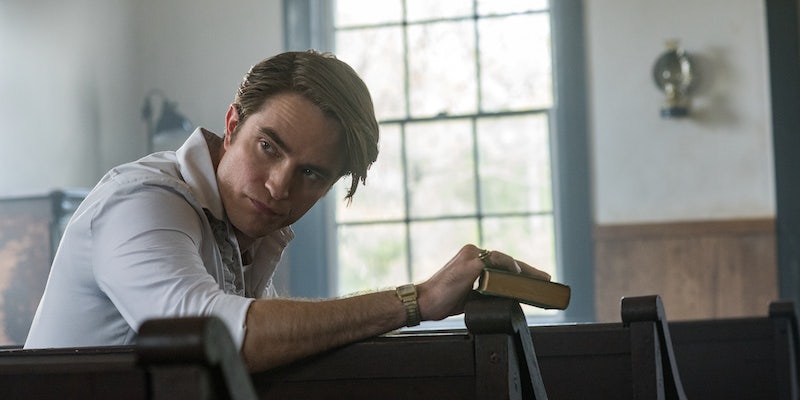 The Devil All the Time/Netflix

Mistaking gritty violence for an interesting story, this mid-20th century drama is a dull disappointment.

Tom Holland! Robert Pattinson! Sebastian Stan! Riley Keough! The Devil All the Time’s cast list is more exciting than the film itself, a 138-minute slog through the grim and violent lives of various individuals in mid-20th century rural Ohio. “Some people are born just so they could be buried,” one character intones toward the end, voicing what could easily be the motto of the film.

The Devil All the Time

Directed by Antonio Campos (who co-wrote the screenplay with his brother Paulo Campos), The Devil All the Time is based on an acclaimed novel by Donald Ray Pollock. It’s meant to be a psychological drama, but it’s hard to grasp any sense of purpose due to the film’s repetitive structure and lack of originality. We open with a folksy voiceover explaining the backstory of our initial protagonist. Rarely a good sign, but I gave it the benefit of the doubt. It introduces Bill Skarsgård as a young WWII veteran who gets married and settles down in the colorfully-named Knockemstiff, Ohio. We then fast-forward through his life, interspersed with retro soundtrack choices (the film was co-produced by legendary music supervisor Randall Poster), culminating in Skarsgård and his wife meeting unpleasant ends, leaving their son Arvin behind.

Well, okay, I think to myself. That must be the prologue for our real protagonist Arvin Russell, who is played by Michael Banks Repeta as a child, and Tom Holland as an adult. But no! The Devil All The Time just repeats this process again and again, introducing more characters with their own folksy voiceovers, 1950s music, and fast-forwarded lives. At the risk of dropping some nonspecific but major spoilers here, pretty much everyone ends up murdering each other. We’re probably meant to glean something about human nature from this, but I’m not sure what. My main takeaway was that Hollywood should stop assuming that miserable, violent white men are automatically fascinating. They’re not! You need a good story, too! Not to mention a more compelling setting, which this movie lacks. Despite the highly specific location, there’s no real personality to Campos’ generic take on American Gothic.

When working with a disjointed, multi-strand narrative like this one, you need two things: a great cast and a nimble, emotionally intelligent script. The Devil All the Time has one but not the other. While he’s not exactly a heavyweight, Holland proves that he can carry a serious drama, albeit in a familiar type of role. Like in Spider-Man, Pilgrimage and The Lost City of Z, he plays a naive and well-meaning boy, shaped by the actions of older and more dangerous men. Most of his co-stars make their mark as well, although the women (Riley Keough, Eliza Scanlen, Haley Bennett, and an underutilized Mia Wasikowska) predictably get less to do, stuck in supporting roles to their male relatives

Robert Pattinson is the standout, which is shaping up to be a habit whenever he gets cast in a supporting role. He and Harry Melling (another memorable performance) both play preachers, offering a dose of theatricality amid the downbeat personalities of the other characters. Pattinson’s Reverend Preston Teagardin arrives in a frilly shirt and delivers high-pitched sermons where he shrieks about “deluuuusions!” while negging female congregants. It’s not dissimilar to his hysterical cameo as the camp French prince in The King, another otherwise humorless Netflix release. Sebastian Stan sadly doesn’t fare as well, playing a two-dimensional corrupt sheriff who appears to have his cheeks stuffed with padding like Marlon Brando in The Godfather.

The Devil All the Time will probably find a significant audience among Marvel fans watching for Holland and Stan. Likewise, there’s Pattinson’s loyal fandom, who will follow him anywhere. That’s a key reason to hire a cast like this, and it’s disappointing to see them squandered on such boring fare. Antonio Campos earned positive buzz making smaller, weirder movies in the past, and I can see how this film might have worked better by focusing on just one or two characters. But with its sprawling cast and length, The Devil All the Time manages to feel both bloated and under-written at the same time, with little to offer in the way of thrills or emotional impact.