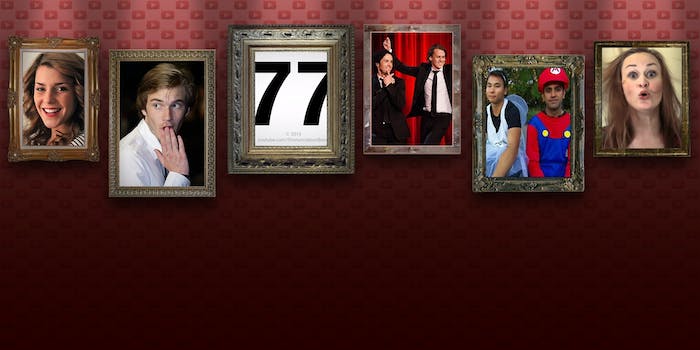 In a year of pranks and fails, these are the channels and creators that left the biggest mark on YouTube this year—and not always for the better.

In 2013, YouTube strived to become a mainstream entertainment destination—a new Hollywood of sorts.

Having already invested $300 million in original content, the Google-owned company doubled down on exclusive programming with two themed weeks—devoted to geeks and comedy—and a video music awards program, pairing mainstream stars with YouTube’s A-list talent in an effort to blur the distinction between the two.

If there was a lesson to be learned, it’s that success on YouTube can’t be pre-programmed from the top down. It has to start from the community, with the inventive creators who are pushing the platform’s boundaries and building their own independent audiences.

In a year of pranks and fails, these are the channels and creators that left the biggest mark on YouTube this year—and not always for the better.

For 77 days, the Internet was enraptured by Pronunciation Book’s cryptic countdown, a series of disturbing video messages uploaded daily. Sleuths from Reddit and 4chan pieced together clues from the channel’s warped English-speaking tutorials into elaborate conspiracy theories. It ended not with a whimper or a bang, but with a marketing stunt turned performance art piece that challenged every notion of authenticity on the Web.

These three have long been among YouTube’s leading ladies: Helbig hosts My Damn Channel’s Daily Grace and stars in MyMusic, Hannah Hart turned My Drunk Kitchen into a national sensation, and Mamrie Hart serves up comedy in a martini glass with You Deserve A Drink. But in 2013, the three real-life best friends took serious steps offline, too, first with a live comedy romp and then the filming of a feature-length film, Camp Takota.

Pick-up artistry—an oxymoron at best—hit a fever pitch online this year, due primarily to a pulled Kickstarter project that was labeled a “date rape guide” and this disturbing YouTube sensation, anchored by three bros: Kong, Jesse, and Jason. Simple Pick-Up was at at the forefront of a disturbing trend of content creators turning sexism into pageviews, lowering the bar for original content all the way to the floor.

In one video, the dudes rubbed unsuspecting women, sometimes against their will, and in another viral stunt, the three motorboated women under the guise of raising funds for the Breast Cancer Research Foundation. The organization ultimately refunded the money and “asked Simple Pickup to cease all references and associations to our organization.”

4) The Vlogbrothers | The standard bearers

Brothers Hank and John Green are the only YouTubers to make a repeat appearance on the Dot’s annual top 10 list, and with good reason. Aside from running VidCon, the closest thing to a YouTube convention, and churning out incredible content on multiple channels, this year the two launched Subbable, a crowdfunding subscription service that allows fans to directly support content creators. And when YouTube’s Google+ integration hit the fan, the brothers quickly responded by added a commenting system to Subbable.

“It’s a low-margin business, and this is easily 10 times bigger (in terms of startup capital) than anything else we’ve ever funded,” Hank Green told the Daily Dot in August. “So it’s scary and exciting, and I really hope it can sustain not just itself but a lot of amazing content.”

Sweden’s Felix Arvid Ulf Kjellberg is an almost inexplicable YouTube sensation. At one point, he was gaining roughly 50,000 new subscribers a day… by commenting on video games. In August, PewDiePie became the most-subscribed to channel ever, surpassing both Jenna Marbles and Smosh, with over 19 million followers. Like Hank Green, he also used his popularity to push back against YouTube’s changes to the commenting system, disabling comments altogether in protest and fielding questions about his decision on Reddit.

Thanks to Ylvis, the entire world now knows what the fox says. While often dubbed the “Lonely Island of Norway,” that’s not exactly accurate.  Brothers Bård and Vegard Ylvisåker have been cranking out sketch comedy videos since 2000, and their talk show, I kveld med Ylvis (Tonight With Ylvis), just entered its third season. But it took one absurd music video to push them over the top. Ylvis isn’t a one-hit YouTube wonder like Psy. Their prank videos, like this one in IKEA, regularly go viral.

Veteran TV producer Brian Robbins cornered the teen demographic on YouTube. In less than a year, his AwesomenessTV recruited a small army of promising contributors, landed a $33 million deal with DreamWorks Animation, and partnered with Nickelodeon for an original series that highlights the channel’s original sketches and talent. In the process, it’s become one of the most powerful and influential YouTube networks around, with 236 billion views to date.

“What causes a hangover?” Solved. “The scientific power of naps.” Check. “What if you stopped sleeping?” Answered. With whiteboard animation and clear narration, friends Mitchell Moffit and Gregory Brown have garnered more than 160 million views with weekly educational videos that are as informative as they are entertaining.

“These videos get tons of traffic from being shared because they ask very simple, interesting questions that you would want to talk about with people,” Kevin Allocca, YouTube’s trends manager, told the Daily Dot in November. “These are questions that we don’t always think about, but the moment they’re presented to us we immediately want to know more about it.”

With one song, “My Thoughts on Google+,” this previously unknown singer-songwriter perfectly summed up all of the frustration felt about YouTube’s changes to its commenting system. “You’ve ruined our site and called it integration,” she sang. “I’m writing this song to vent our frustration.” The song clocked 1.8 million views.

Everything filmed with a GoPro ends up looking like a commercial—or becoming one—but that doesn’t make the footage captured any less extraordinary. The versatile, hands-free camera makes everything seem extraordinary, whether it’s attached to a pissed ram, an eagle, a fireman, an office worker, surfer, model train, or a referee.