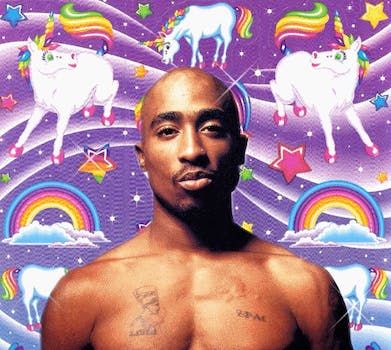 The ’90s are clearly having a moment, maybe even a bigger moment than they experienced at the actual time.

Kriss Kross is reuniting, bringing untold joy to aficionados of wearing enormous clothes backward. Katy Perry has gone Goth. Tupac is doing personal appearances again, thanks to holographic technology that could be better used petitioning Obi Wan Kenobi for help with Star Wars storylines. And, despite all odds, all the haters, and all the chemicals, Courtney Love is still alive and a big Etsy fan.

To honor this recrudescent decade, and also to work as something of a chaser after yesterday’s horrifying GIF, we present the ’90s-est GIF of the 21st century: Tupac and Lisa Frank, together again for the first time. Why, it even features state-of-the-art ’90s animation fabulousness.

The Lisa Frank Life GIF comes from the Eery Elegance blog of Vikki Tornado, who also crossposts material to her Tumblr. We found it on the also very ’90s Comptonian Tumblr, where it has collected 834 notes, presumably in a Lisa Frank binder.