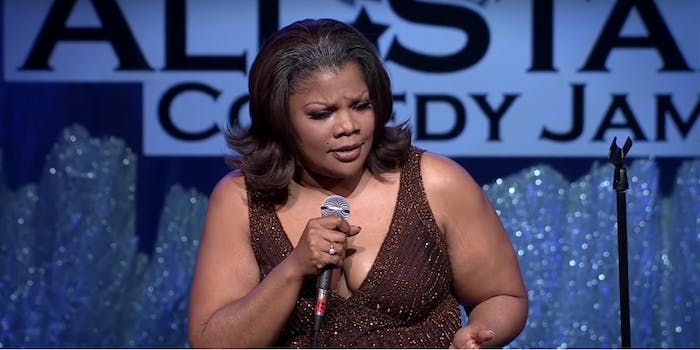 On Friday, comedian and actress Mo’Nique relayed her recent experience with Netflix, and asked followers to boycott the company over “gender bias and color bias.”

She explained that the streamer offered her $500,000 for a comedy special, and cited Amy Schumer’s renegotiating of her deal for The Leather Special after the comedian saw that Dave Chappelle and Chris Rock were getting paid much more. Still, Schumer’s initial deal was reportedly $11 million.

After Mo’Nique’s plea for a boycott started circulating, Wanda Sykes thanked her for speaking out and claimed that Netflix offered her “less than half” of that $500,000 offer for a special. “I was offended but found another home,” she said.

.@moworldwide, thank you for speaking out. @netflix offered me less than half of your $500k. I was offended but found another home. #EPIX

As Netflix continues to release standup specials weekly, finding another home for a special isn’t an option for every comedian. Showtime (which released Mo’Nique’s 2007 special I Coulda Been Your Cellmate) and HBO aren’t putting out the volume of specials that Netflix is, and smaller outlets like EPIX likely don’t pay as much. On Sunday, Mo’Nique posted a follow-up video, adding in Sykes’s comments and marveling at the fact that the two of them combined—two women with “50-plus years in the comedy game”—were offered roughly $750,000.

“Make that make sense,” she said.

Compounding the issue were reports that DeRay Davis, who released his special How to Act Black on Netflix last year, commented on Instagram that he was paid $5 million for his special.

the queens MO’NIQUE & WANDA SYKES caN get 20million a piece I wouldn’t CARE it’s deserved. But I’ve never spoke on OR COUNTED ANYBODY else money in all my 18 YEARS Of grinding with REAL COMEDY…leave me out the shit. I just got this Lil money..now send the bottle girl please‼️

Wanda Sykes is on a Golden Globe-winning sitcom, and still got low-balled by Netflix. For all those saying Mo’Nique should be grateful for bread crumbs, save that energy and invest it in reading about the racial wage gap.

In a recent interview with Sway, Mo’Nique expanded on why she didn’t think $500,000 was fair: If she took that offer, “what does Tiffany Haddish have coming? If I accept that, what does the Black female comedian have coming?”