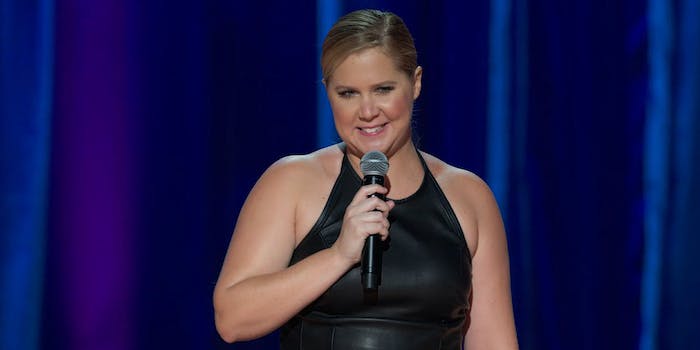 Amy Schumer renegotiated pay after seeing what Chappelle, Rock got from Netflix

It's yet another example of the pay gap in Hollywood.

According to a new Variety report about equal pay in Hollywood, Schumer renegotiated her deal for March’s The Leather Special after seeing that Dave Chappelle and Chris Rock‘s specials were netting much more. A Variety source claims Schumer initially got $11 million, compared to Rock’s $40 million for two specials, and Chappelle’s $60 million for three. Schumer then received “significantly more compensation” though it’s not clear if she received $20 million. We’ve reached out to Netflix for comment. Schumer was the only woman on Forbes‘ 2017 highest-paid comedians list.

This isn’t the first time pay disparity has been an issue for Netflix. Last year, House of Cards star Robin Wright detailed how she demanded a raise so she was being paid the same as co-star Kevin Spacey. Earlier this year, she confirmed that equal pay still had not happened.

Last month, on Black Women’s Equal Pay Day, Community star Yvette Nicole Brown tweeted about the disparity not just between men and women, but between black and white women. In a tweet today, she pointed out how deeply ingrained the disparity is.

And more importantly, pay disparity is not about me or ANY one person or show or network. It's an INDUSTRY wide issue. #ThatsTheOnlyPoint