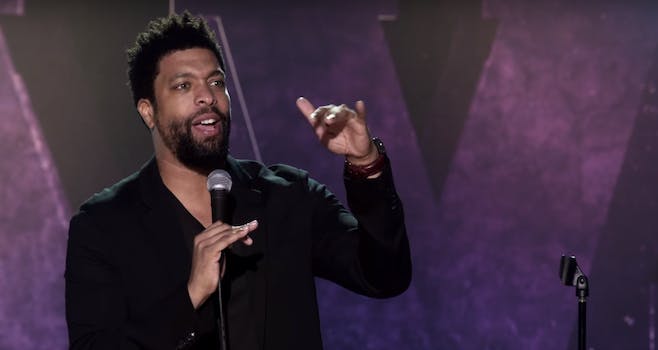 'How to Act Black' is dynamic crossover comedy.

DeRay Davis‘ mercurial career could’ve gone either way. If you recall any of his earlier work, it’s clear he was a star. But was he going to get his big break in a mainstream film? Only if you count his addition to the Barbershop series.

Could he lead a network TV pilot? Not yet.

Would he stay on the “urban” circuit, where he’s hugely successful, and perhaps never find the ideal vehicle for a crossover? Streaming giant Netflix, which has invested heavily in comedy specials, believes in the still-rough-around-the-edges Chicago comedian.

How To Act Black, Davis’ overdue big break and first Netflix special, shows his evolved craft and a thriving history still being written.

From the start, there’s a noticeable change in Davis’ demeanor, who could occasionally be standoffish and ready to battle the energy of the audience. Here, there’s an assuredness—not an arrogance. His brand of comedy is as blue as ever but maturely reflects on his upbringing.

One of the funniest bits features an animated Davis discussing the tricky economics of Black actors auditioning for Hollywood roles. He recalls white casting directors routinely asking him to portray who he believes is his essential self, the “Chicago ‘hood n***a.” The detailed nuance seals in the joke: When he mocks the audacious white men who judge his Blackness, it stings. He takes it a step further in slyly raising the issue of Hollywood’s problem with race and racism.

All of this, of course, is told in Davis’ course manner, as a through-and-through Chicagoan from the South Side. He’s at his very best—if still jarringly crass for audiences not used to the Black comedy circuit—when directly addressing and physically acting out the knotty dances between men and women. Peculiar tangos aren’t new terrain for Davis, who’s famously known to be in a polyamorous relationship with two women.

How To Be Black pushes a comedian continually on the verge of stardom through to the other side. Here’s hoping this is the beginning of a fruitful Netflix partnership.