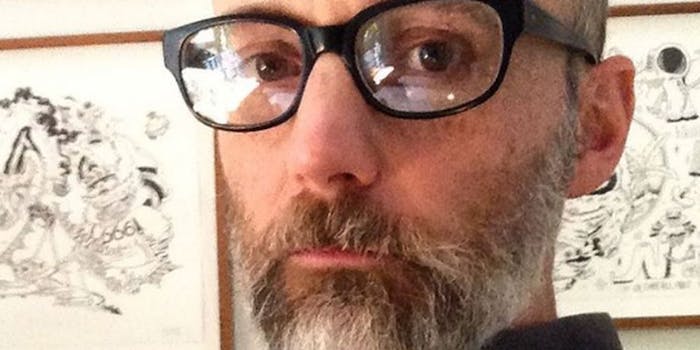 Moby thinks war with Iran is imminent, and that Trump is a Russian spy

Musician and activist Moby took to social media on Monday to lay out a series of specific, left-field conspiracy theories involving President Trump. He thinks we’re on the brink of war with Iran, and that Trump is a Russian puppet who enjoys being urinated on by prostitutes.

The good news is that, if the musician who struck fame with 1999’s textured electronica album Press Play is to be believed, Trump’s own Republican party is actively plotting against this apparently treasonous comrade to Putin.

“[T]hese are truly baffling and horrifying times, as we have an incompetent president who is essentially owned by a foreign power,” Moby wrote on Instagram after talking to friends who “work in DC.”

Moby did not reply to a request for comment.

that question: in the face of trump's incompetence and racism and tyranny and misogyny and corruption, what can we do? the answer: everything. 1-remember november 6, 2018. mid-term election. when we take back the house, the senate, state and local legislatures, state houses, etc. 2-voter registration and voter i.d. trump and gop are trying to restrict voting as much as possible. we can fight them in court, but we can also do our best to get voter i.d's to everyone who needs one. 3-support the organizations who need support. of course that's the aclu and planned parenthood and naral and emily's list and countless others. there's really no end to the number of organizations who need our help during these dark days. 4-support the people who need support. we've already been doing this, but we will need to do more. immigrants, muslims, lgbtq, journalists, and everyone who is going to suffer under this administration. 5-lobby your representatives. let all of your elected officials know that you're paying attention and that you support them in their resistance. and encourage them to resist. 6-boycott. clearly: don't buy anything with the word 'trump' on it…but also boycott any/all of the companies who've been supporting trump and his horrifying agenda. there are great lists on-line. 7-be brave, be vocal. stand up to bullies, protest, march, show up, be loud, be smart. use your social media, your communities, your networks to draw attention to the worst abuses of trump and the gop. 8-unify and stay focused. now is not the time for in-fighting or provincialism. no matter what our individual causes we can all agree that replacing trump and the gop will help us to make the country and the world a better place. in-fighting will weaken us, as it did in 2016. thanks, moby

He also suggested that we listen to punk rock pioneers Black Flag during the “apocalypse.”

As of this writing, Moby is a trending item in the U.S. on Twitter.

Let’s hope he’s the kind of celebrity who is narcissistic enough to believe in covert government schemes to silence the world—and is not actually on to something.