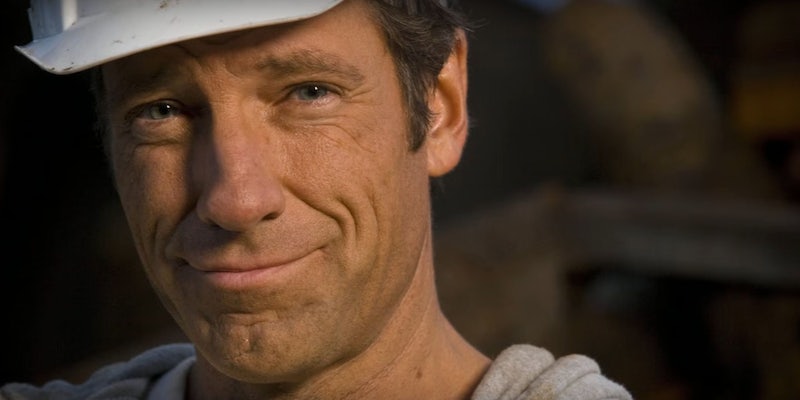 As long as reality TV stars replace our presidents, they might as well replace our pundits. At least, that seems to be the appeal of former Dirty Jobs host Mike Rowe.

His latest take on the outcome of the U.S. presidential election is a doozy, too. Rowe, who has amassed a massive Facebook following for his down-home wisdom and charm, answered a fan question about the election by comparing Trump’s appeal to working-class America to his own.

“Dirty Jobs said ‘Hey – we can see you,’ to millions of regular people who had started to feel invisible,” wrote Rowe in a viral Facebook post this week. “Ultimately, that’s why Dirty Jobs ran for eight seasons. And today, that’s also why Donald Trump is the President of the United States… Yeah, it was dirty job for sure, but the winner was NOT decided by a racist and craven nation – it was decided by millions of disgusted Americans desperate for real change. The people did not want a politician. The people wanted to be seen.”

This theme espoused by Rowe and others—that working-class voters responded to Trump out of economic frustration and not demographic resentment—is aligned with the same bootstraps mythology both Trump and Rowe exploit for their own gain. Both men rely on a folksy faith in hard work and ambition that simply doesn’t match the reality of most American workers, and they do so at the peril of the very people who serve as the foundation of their fanbase.

This is not a surprising step into the political arena for Rowe, who runs a foundation to train workers for skilled labor and lobbies both institutions and political candidates to embrace infrastructure spending and skilled labor training. He’s written open letters to President Barack Obama in favor of such, and appeared with Mitt Romney during the 2012 election in a bid to advocate for worker training over four-year degrees.

“We’ve elevated the importance of ‘higher education’ to such a lofty perch that all other forms of knowledge are now labeled ‘alternative,’” Rowe told the Senate Committee on Science, Commerce, and Transportation in 2011. “In a hundred different ways, we have slowly marginalized an entire category of critical professions, reshaping our expectations of a ‘good job’ into something that no longer looks like work.”

Rowe’s focus on so-called “shovel ready” jobs fits in well with President-elect Trump’s own plans to spend a trillion dollars rebuilding and updating the nation’s roads, highways, bridges, and airports. It’s the kind of job creation proposal Democrats and Americans have wanted for decades and promotes exactly the traditional blue-collar work so often romanticized by people like Rowe.

If it’s the first time you’re hearing about Trump’s infrastructure plan, don’t be surprised. While Trump likes to promote himself as a builder, his supporters only seemed to have one piece of infrastructure in mind—a massive wall along the Mexican border. Trump supporters overwhelmingly support the proposed wall and it served as a greatest hit at Trump rallies, but the very idea of it disproves Rowe’s notion that economic anxiety is what comes first for Trump voters.

While Rowe aptly points to education and skills training as the solution for poor Americans, Trump built his campaign on sheer exploitation of xenophobic skepticism of immigration and trade by poor white Americans. According to the Pew Research Center, Trump supporters blame both legal and illegal immigration for job loss and more closely associate illegal immigrants with illicit and violent behavior.

Not only are illegal immigrants less likely to commit violent crimes than naturalized U.S. citizens, but illegal immigration doesn’t take away jobs from Americans who would otherwise take them at any scale that Trump claims. So while Rowe and others would like to imagine Trump is merely the figurehead of a populist uprising by hard-working Americans, he is actually the embodiment of misplaced and mistaken racial animosity.

Job-training programs like those promoted by Rowe are a good start toward moving low-skill workers into the kind of sustainable jobs that the future holds. Rowe likes to talk about the skills gap in the context of old-fashioned “shovel ready” jobs, but most of the jobs that will be created in the coming decades will come from technology and IT sectors.

Likewise, the real threat to the jobs of Trump supporters aren’t illegal immigrants but automation—a study by Oxford University suggests half the jobs in America will be computerized or performed by machines by 2025.

Trump’s infrastructure plan rests on nostalgic ideals about craftsman and laborers—that the honor and grit of elbow grease alone can raise good people out of poverty. According to Trump and many of his supporters, immigrants are the only thing keeping Americans from reaching that aspiration.

He’s done so in a boldly transparent way. Trump stripped himself of the censorial, dog-whistle nature of politicians and embraced the xenophobia of some of his fans head on, calling Mexicans “rapists” upon throwing his hat into the presidential race.

Americans deserve to be anxious about the fate of blue-collar work, but to ignore the way Trump has used racism as the cure is a disservice to the kind of workers Rowe promotes.

Correction: In a Facebook post addressing this story, Rowe says that while his attributed quote from 2011 is correct, it failed to catch a key distinction. Writes Rowe:

You got the quote right, but I have never argued in favor of training “over” four-year degrees – only that one form of education should not be positioned as subordinate to another. That’s an important distinction. Part of the reason shop classes vanished from high schools is because parents and teachers stopped encouraging students to explore those careers. Why? Because those careers became stigmatized. If your kid was on a vocational path, it was assumed it was because he or she wasn’t capable of anything else. That stigma is alive and well today. It’s called “elitism,” and it’s another dangerous “ism” that’s affecting millions of people. It’s also part of the reason college has become so expensive.

Read the rest of Rowe’s reply below: