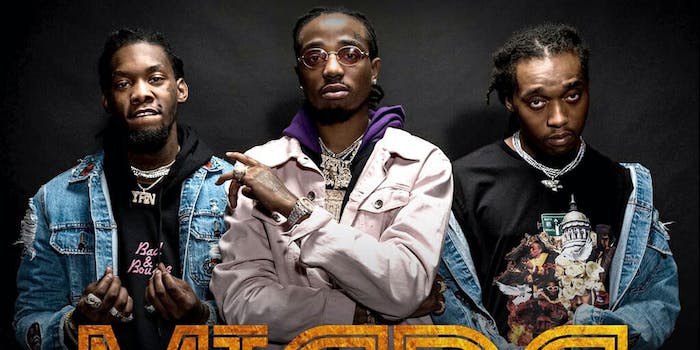 Did Migos refuse to work with drag queens during Katy Perry’s ‘SNL’ performance?

This is bad, but not boujee.

Have to respect this double dab attempt by Katy Perry. pic.twitter.com/a4bLwWnUcC

According to a report from World of Wonder, the production company behind RuPaul’s Drag Race, SNL cast and crew members told the queens—including Brenda Dharling, the Countess Mascara, RuPaul’s Drag Race season 6 contestant Vivacious, and many more—that Migos refused to perform with them on “Bon Appétit,” despite the fact that they had been invited to join Perry on both numbers. WOW has since deleted the report, and a representative from Capitol Music called the story “completely false and fabricated.” A Reddit user who claims to have been there also wrote that Perry did manage to maneuver the queens into the performance in a smaller way, calling it “progress.”

“I was one of the performers on that table with them the whole time, during the rehearsal for 3 days. On the day of the filming, when I got there, I was told to leave. I wasn’t on the set at the time, but we were asking what happened. They said it was because Migos doesn’t feel comfortable with having drag queens there.”

“I heard it from the stylist. They changed the queens out in the Bon Appétit number, and they didn’t seem too thrilled during rehearsal either, with us there.”

“I work at SNL and the rumors are true! Migos held up rehearsal because they ‘weren’t comfortable with the drag queens’ being there. There were initially more drag queens on the set for that song, but after Migos threw a fit, Katy Perry’s team removed some of the queens from the performance. Additionally, Katy Perry didn’t invite any of the queens to the afterparty… So, none of them were allowed in.”

“Aww, someone says, ‘I miss your old, black hair,’” Perry said in the video. “Oh, do you miss Barack Obama as well? OK, times change. Bye.”

This joke inspired Chicago producer Mano, who worked on the Weeknd’s “The Hills,” to tweet about the time Perry called him the N-word in Paris in 2013.

Perry likewise collaborated with the decidedly un-woke Migos: In a February Rolling Stone profile, the band balked at the fact that fellow Atlanta rapper iLoveMakonnen came out as gay via Twitter.

“That’s because the world is fucked up,” Offset said in response to the news. Quavo echoed the sentiment with a simple, “That’s wack, bro.”