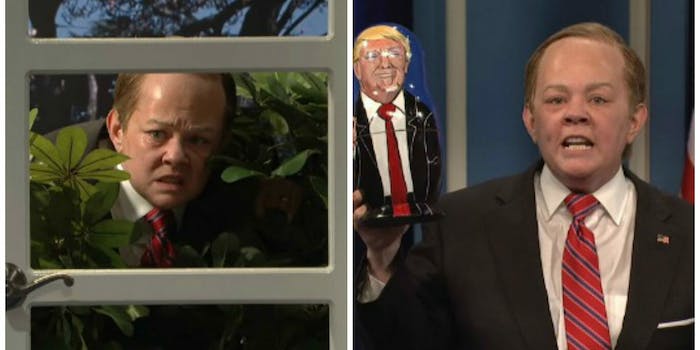 Melissa McCarthy returns to ‘SNL’ as Sean Spicer, and brings out the emotion in all of us

McCarthy as Spicer will make you laugh. And she might make you tear up.

After the hubbub in New York City on Friday when hundreds, if not thousands, of people spotted Melissa McCarthy as Press Secretary Sean Spicer roaming the Manhattan streets while riding a motorized podium, McCarthy returned to Saturday Night Live as this week’s host.

She did not disappoint as Spicey.

SNL introduced a new character in Deputy Press Secretary Sarah Huckabee Sanders (played by Aidy Bryant) who emerged to address the press corps and introduced herself as the child of former presidential candidate Mike Huckabee and a “big southern hamburger.” It doesn’t take long, though, for Cecily Strong to notice that Spicer, just like in real life, is hiding in some bushes outside the briefing room.

From there, Spicey returns to the podium, and as is usual the case, madness ensues (and we get to see exactly what they were filming in New York) until the joyous, slightly uncomfortable climax of the sketch.