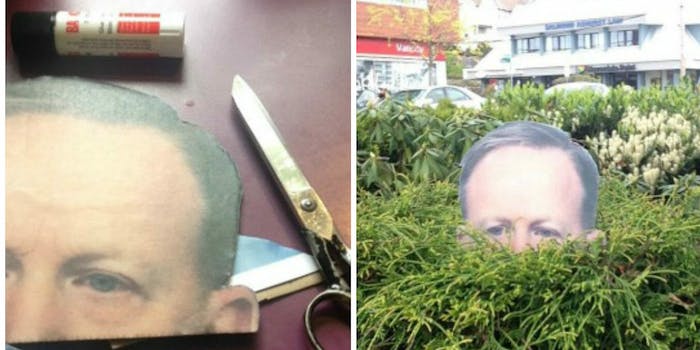 One of the silliest stories to emerge from the Donald Trump administration this past week was the report that Press Secretary Sean Spicer, in an attempt to avoid reporters, hid near or around or maybe inside some White House bushes so he wouldn’t have to talk to the press about the firing of former FBI director James Comey.

And while we wait to see Melissa McCarthy’s take on the matter on this week’s Saturday Night Live, you can get to work installing a Sean Spicer in your own home garden.

Thanks to Facebook user Lisa Kadonaga, it’s real simple. Cut out a piece of cardboard, glue a picture of Spicer’s face to it (you can find the photo on Dropbox), slap it on a stick, and place it among your hedgerows, flowers, and tree. Like so.

***UPDATE*** I scanned my blow-up of Chip Somodevilla's photo into PDF form and uploaded it to Dropbox, by popular…

Kadonaga’s idea is such a hit that’s it been shared more than 100,000 times on Facebook and has accumulated nearly 50,000 likes.

It’s no wonder that Spicer has begun popping up in shrubs around the country.

Holy shit!! Someone put @seanspicer in a bush off the freeway! 😂😂😂 pic.twitter.com/Qi1P6oN6n2

My friend is has created Sean Spicer herb markers for his garden. pic.twitter.com/weRe4YzLcg

But Kadonaga’s kicker to her Facebook post is the real barnburner. She wrote, “And hey, if you’re concerned that when exposed to the outdoors, the image will run ….no worries, that’s exactly what Sean Spicer does, so it’s totally authentic.”