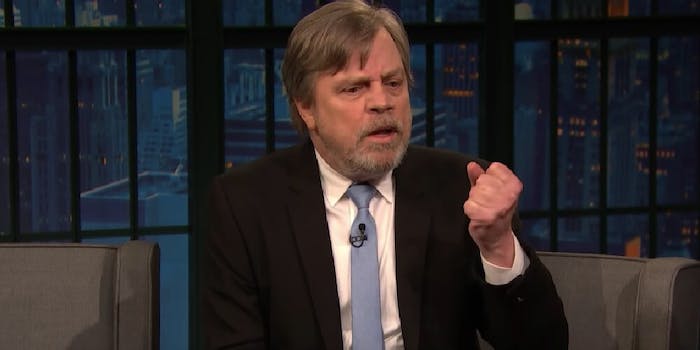 The decision comes after Facebook announced it would allow political ads that contain lies.

Star Wars actor Mark Hamill tweeted on Sunday that he would no longer use Facebook after the company announced that it would continue to allow political ads that contain lies.

“So disappointed that Mark Zuckerberg values profit more than truthfulness that I’ve decided to delete my Facebook account. I know this is a big ‘who cares?’ for the world at large, but I’ll sleep better at night,” he wrote.

So disappointed that #MarkZuckerberg values profit more than truthfulness that I've decided to delete my @Facebook account. I know this is a big "Who Cares?" for the world at large, but I'll sleep better at night. #PatriotismOverProfits 🇲🇾>💰 https://t.co/seb2eJMTo6

After public outrage about misinformation spread on the social media platform, Facebook released a statement last week about its ad policy. Basically, the company told people to figure it out themselves. Facebook announced that it would offer people an option to see fewer political ads, but the company would not be filtering misleading or incorrect content.

Most people supported Hamill’s decision. Several people tweeted back saying they have also deleted their Facebook accounts for similar motives.

“If Luke Skywalker aka Mark Hamill is deleting his Facebook account, so should you,” author Don Winslow wrote.

I did that about a year ago and have never looked back. Zuckerberg can kiss my ass.

I deleted Facebook over a year ago.
Welcome to the…non-darkside?#DeleteFacebook

Hamill is the latest in a stream of famous people and lawmakers speaking out against the company, which has been involved in several scandals since the election of President Donald Trump.

2day I did something VERY HARD 4 me.Facebook has helped me with my Charity, &there are amazing young Ppl there.I have a special friend (Lauren)who I Respect & Admire,but today I deleted my Facebook account .
I Love My🇺🇸🙏🏻.
I Believe….There are Things MORE”IMPORTANT”THAN💰💰

I didn’t realize there was one. Will do.