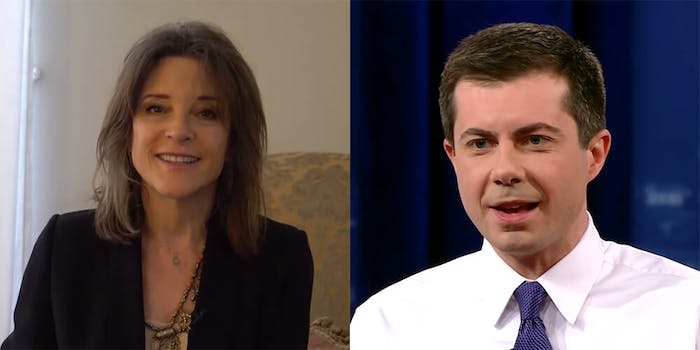 'If you have that person’s phone number I will call them myself.'

Author and spiritual guru Marianne Williamson is no longer in the race for the Democratic nomination. She officially ended her campaign Jan. 10 through a blog post where she affirmed that “Yes….love will prevail” even without her. But Williamson clearly had something to say to one individual who apparently began supporting Pete Buttigieg in her absence.

If you have that person’s phone number I will call them myself.

In a reply to Daniel Denvir, the host of Jacobin‘s The Dig podcast, Williamson said that she wanted to personally call and speak to a former die-hard supporter whom Denvir had encountered and who now supports Buttigieg. Presumably, this call would involve Williamson attempting to dissuade the voter from continuing their support of the former South Bend, Indiana mayor.

Williamson later clarified that she has not officially endorsed a candidate “because there’s more than one good progressive and everyone must vote their conscience.” However, her choice words of “no real vision” and “corporate tool” in that same clarification seemed to also target Buttigieg.

I haven’t endorsed anyone because there’s more than one good progressive and everyone has to vote their conscience. But I submit to my supporters that someone with no real agenda and no real vision for our country beyond a vague notion of inclusion is nothing but a corporate tool

Recently, Buttigieg released a piece of campaign material based on a quote from his CNN town hall appearance that was parodied and memed. The quote was judged by some, including Ana Kasparian of the Young Turks, to be an example of word salad and circular speaking with no real meaning. In a reply to Kasparian’s tweet critiquing the Buttigieg quote, Williamson chimed in to say that if she said anything similar to this, people would make jokes about her being high on acid.

If I had said it, there'd be jokes about my being on acid. And I would never have said it.

It is clear that Williamson is not a Mayor Pete stan.