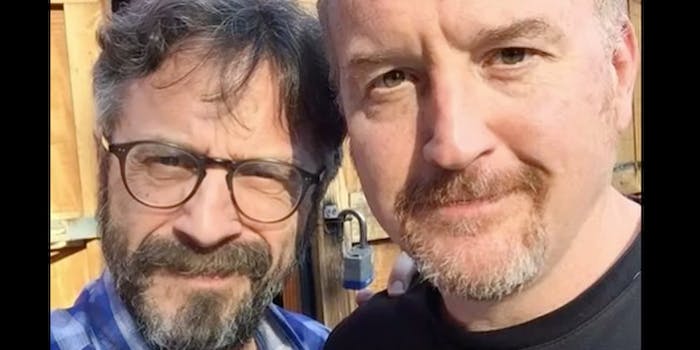 On the latest episode of podcast WTF, comedian Marc Maron grapples over his friendship with Louis C.K. after his admission that he sexually harassed several women throughout his professional career.

“There was a report in the New York Times … and a day later Louis copped to it—copped to it late, but he did it, and he’s my friend, and it’s a difficult position to be in,” Maron said. “I certainly can’t condone anything he did, there was no way to justify it, no way to defend it, no way to apologize for him about it, no way to let him off the hook.”

I've been friends with Louis CK for a long time. I read the article and none of it is good. I'll have more to say about it on my own show and not a shitty platform like Twitter.

While Maron says he can’t condone or defend C.K.’s actions, he also plans to remain friends with the comedian.

“People are like, ‘How are you gonna be friends with that guy?’ He’s my friend,” Maron said. “He fucked up. He’s in big fucking trouble. What am I gonna do? I’m gonna be his friend. What do you want me to do?”

On Twitter, fans of Maron thanked him for coming forward and opening up about his thoughts regarding C.K.

Thank you @marcmaron for sharing your thoughts about #LouisCK & #SexualHarrassment in general. You could have taken the easy way out & just condemned him, but personalizing it made it more powerful!
Here's where everyone can listen to the podcast:https://t.co/fuDEk4dNb5 pic.twitter.com/LytRyy0CIy

Take some time to listen to @marcmaron and his strong words for the first 20+ minutes of his podcast. Not all feminists are female. #BelieveWomen (the whole damn show is good! thx for all of it Marc! xx!) https://t.co/wEtZ71yVZa

That opening might be some of the rawest, most meaningful and important shit you've ever uttered. Thank you Marc… people will hear you

Maron also admitted he was aware of at least one of the stories about C.K. years ago, but he brushed it aside because C.K. denied the accusation. Maron said in that particular instance, no women were named in the story and it was easy to believe C.K.

But Maron also said he understands that the comedy industry’s attitude toward women enabled his ability to dismiss the allegations, highlighting the prevalent sexist culture that exists.

“The work environment, the social environment makes it difficult for people to come forward and be heard, to be listened to, to be believed, and for action to be taken around that,” Maron said. “It is pushed aside, it is dismissed, it is framed as an annoyance or an embarrassment, it is used against people, it is used as a threat, that is the structure that exists in life.”

To fix the toxic culture in comedy, Maron said other men in the industry must learn to have more empathy. He also admitted he struggles to empathize with women and has been a part of the problem by not hiring more women for his own projects—but he’s learned a lot already from working in the almost women-exclusive Netflix series GLOW.

“You know, when you have a man brain or are not capable of empathizing properly with women, which I don’t think a lot of men are—and I’m not speaking for all men, but I can speak for myself—to find that empathy requires some sort of vigilance,” he said. “It requires—not just listening to someone’s story or listening to something someone says—to actually put yourself in the place of another person. That requires a little work.”