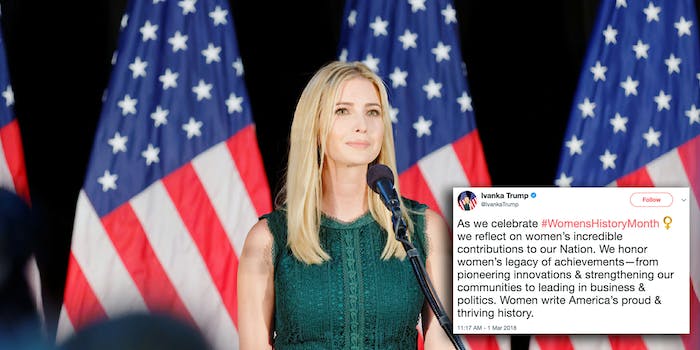 Guess she didn't learn after her #BlackHistoryMonth tweet was dragged.

Ivanka Trump drew criticism on Thursday when she tweeted about Women’s History Month and women’s “incredible contributions to our nation.”

“As we celebrate #WomensHistoryMonth we reflect on women’s incredible contributions to our Nation,” she tweeted. “We honor women’s legacy of achievements—from pioneering innovations & strengthening our communities to leading in business & politics. Women write America’s proud & thriving history.”

As we celebrate #WomensHistoryMonth we reflect on women’s incredible contributions to our Nation. We honor women’s legacy of achievements—from pioneering innovations & strengthening our communities to leading in business & politics. Women write America’s proud & thriving history.

This statement would have been received as a perfectly acceptable tweet if it had come from anyone else. But, alas, it was said by a woman who has done little to stand up for women or their concerns as the president’s advisor. She has instead supported her father throughout more than a dozen sexual harassment accusations and despite his numerous degrading comments about women. Hell, her mother, Ivana, even testified in 1989 that Donald made her feel “violated during sex” and Ivanka still stands by him.

In fact, it was only a few days ago that the senior adviser to the White House told NBC News anchor Peter Alexander she thought it was a “pretty inappropriate question to ask a daughter if she believes the accusers of her father when he’s affirmatively stated there’s no truth to it.”

And your legacy? Do you think about that? Where, WHERE, are the women you have championed and empowered? Wouldn’t ONE of them have come out to talk about how you have improved her life by now. You don’t get to “champion” this month. You are complicit in this administration.

Another vapid word salad from the whisper grifter.

Who do you mean by “we?” Apparently you don’t believe your father’s accusers who are women! Who do you honor? PLEASE tell America the women that made a difference for this country and I’m not talking about your stepmother either!

You mean like record-breaking Women's March in protest of your father being inaugurated? You mean like the record numbers of women running in the mid-terms to take down the GOP, who are the guard dogs for your father & the Trump Cabal? Yeah…we are writing a special history now

I call BS! You played the daughter card when asked about daddy's dalliances. You have no standing in history of accomplished women. #RESIGN #TrumpCrimeFamily

Are you in a parallel universe from your father? Have you been alert and aware of anything he's done in the last 25 years when it comes to women? you need to just stop.

And we expect you to write the newest chapter in history, being the first presidential daughter to go to prison. Breaking those barriers Ivanka 👍 How's that security clearance coming along?#Complicit #Collusion #LockHerUp

Last month, Ivanka made a similar misstep when she attempted to tweet about Black History Month.