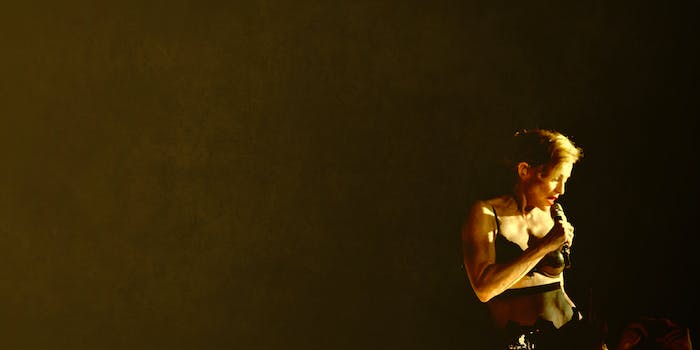 Madonna kissing Drake without his consent is super awkward to watch

His reaction says it all.

Madonna has been on full blast recently, partnering with Tidal, debuting her new music video on Meerkat, and jamming with the Roots. During a performance at Coachella over the weekend, she went full YOLO and planted a kiss right on Drake‘s mouth.

In this clip from the rapper’s Sunday headlining set, Madonna can be seen getting very intimate with him—all without his foreknowledge or permission.

The look on Drake’s face says it all, and that, paired with her outro, was the cherry on top: “Bitch, I’m Madonna.”

Some people on Twitter laughed off the kiss as a publicity stunt. Others pointed out that Drake didn’t consent to it, that he was visibly uncomfortable, and that consent goes both ways. And of course there were plenty of jokes about how Madonna is old and was trying to steal Drake’s essence.

In a March interview with Us Weekly, Madonna revealed that her “lifelong ambition I still want to fulfill is to go on a dream date with Drake—and only kiss him.”

Would we be talking about this story the same way if he planted a kiss on her? The answer seems clear.