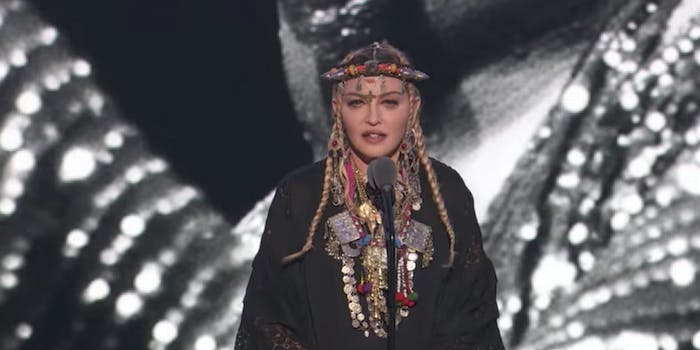 It's not the first tribute she's botched.

Madonna is facing backlash online after her tribute to Aretha Franklin at the VMAs on Monday night was criticized for being more about herself than Franklin, whose death last week stunned the world.

Toward the end of the ceremony, Madonna—who was presenting the video of the year award—took the stage to tell the crowd how Franklin’s music helped launch her career. According to Madonna, she had gone to a musical audition for French producers early in her career after struggling as a dancer.

“Why not?” she said of her mindset about the audition. “The worst that can happen is I can go back to getting robbed, held at gunpoint, and being mistaken for a prostitute in my third-floor walk-up that was also a crack house.”

She hadn’t prepared a song to perform for the audition but she knew how to sing “(You Make Me Feel Like) A Natural Woman” and performed an a cappella rendition for the audition. She didn’t get what she was trying out for, but it led to another job in Paris. And the rest is history.

Madonna’s story does mention Franklin, but Franklin is hardly involved—and it’s more about the existence of a Franklin song than about Franklin herself. And on a night where she was supposed to pay tribute to Franklin, many felt that she pivoted so that it ended up being more of a Madonna tribute with a Franklin musical cameo.

Me: It's weird that #Madonna is doing a tribute to Aretha Franklin, but what's the worst that could happen?

But it’s not the first time that Madonna’s paid tribute to another artist who recently died by making it about herself, as some pointed out on Twitter.

Madonna ruined the Prince Tribute on the Billboard Awards in 2016.

Madonna ruined the Aretha Tribute on the #VMAs in 2018.

I really never want to see her again. Ever. pic.twitter.com/rp6QCql3aR

Madonna ended her tribute by thanking Franklin for the impact that Franklin’s music had.

“She led me to where I am today and I know she influenced so many people in this house tonight, in this room tonight,” Madonna said. “I want to thank you, Aretha, for empowering all of us. R-E-S-P-E-C-T. Long live the queen.”