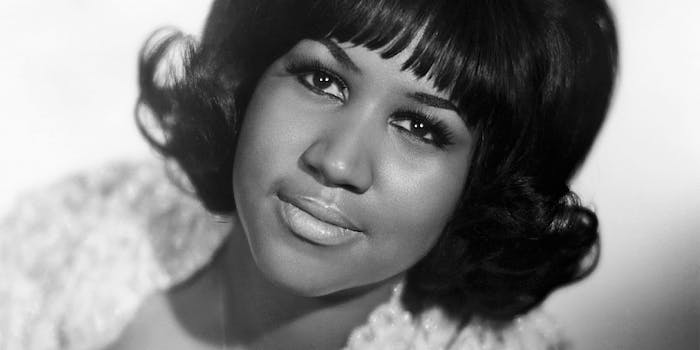 The Queen of Soul had a long and spellbinding career.

Aretha Franklin has passed away at age 76.

Family members reportedly told Detroit’s Local 4 on Monday that Franklin had been hospitalized and was in need of “prayers.” One unnamed source told TMZ that the singer had been battling cancer. Her publicist told the Associated Press that Franklin died Thursday at 9:50am ET, and confirmed pancreatic cancer as her cause of death. In a statement provided to the AP, her family wrote:

In one of the darkest moments of our lives, we are not able to find the appropriate words to express the pain in our heart. We have lost the matriarch and rock of our family. The love she had for her children, grandchildren, nieces, nephews, and cousins knew no bounds.

Franklin, known as the Queen of Soul, started her singing career in a Detroit church, but crossed over into pop and R&B in the early ‘60s. She had her first major hit in 1967 with “I Never Loved a Man (The Way I Love You).” Singles “(You Make Me Feel Like A) Natural Woman” and “Baby I Love You” followed, as did a transformative cover of Otis Redding’s “Respect.” She won 18 Grammys over the course of her career, was awarded the Presidential Medal of Freedom in 2005, and performed at Barack Obama’s inauguration in 2009. (And we can’t forget the incredible 2015 Kennedy Center Honors performance that brought a tear to the president’s eye.)

Franklin continued performing live up until last year, despite ongoing health issues. She told Local 4 she was retiring in 2017. Her last concert was in November.

On Twitter, fellow entertainers, colleagues, and fans tweeted out their thoughts and condolences.

My prayers are with Aretha Franklin & her family during this difficult time 🙏🏾 LOOK BELOW @ what I tweeted at the top of the year we MUST CELEBRATE the Living Legends while they are here to see it. So many have given us decades of Timeless music…❤️ https://t.co/VVacLxcMSI

Praying for the Queen of Soul 🙏🙏 #ArethaFranklin pic.twitter.com/5cfNPrQrq3

This is one of my favorite Aretha Franklin stories…two hours before the Grammys telecast in 1998, Luciano Pavarotti cancelled due to illness. Aretha Franklin sang Nessun Dorma that night with little notice. pic.twitter.com/OroqA5CZ37

She leaves behind four sons.

Update: 9:23am CT: Franklin’s family has confirmed her cause of death and released a statement.