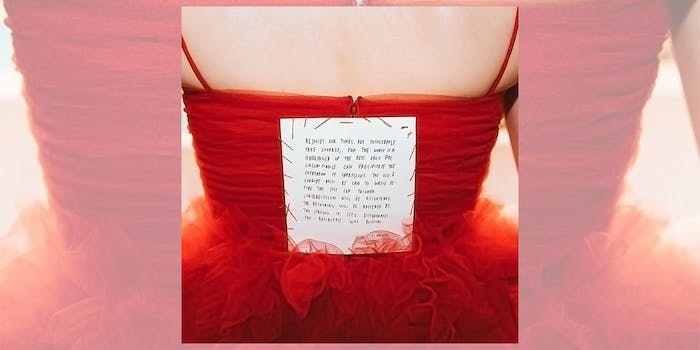 Recording Academy president says women have to 'step up' if they want representation.

Lorde was the only woman nominated for album of the year at Sunday night’s Grammys, but she was nowhere to be found onstage. And apparently that was by design.

According to Variety, the singer was asked to perform as part of a Tom Petty tribute, but declined. She was reportedly not asked to perform solo, though many male nominees did, as did Pink and Lady Gaga. As noted by frustrated viewers, the awards apparently had plenty of time for Sting and Bono, neither of whom were nominated, as well as host James Corden’s intolerable sketches.

Note: Neither Sting nor Bono were nominated for a single award.

But Lorde found her own way to protest the snub, and highlight the industry’s sexism: by sewing the text of one of artist Jenny Holzer’s “Inflammatory Essays” into the back of her dress. It reads:

Rejoice! Our times are intolerable. Take courage, for the worst is a harbinger of the best. Only dire circumstance can precipitate the overthrow of oppressors. The old and corrupt must be laid to waste before the just can triumph. Contradiction will be heightened. The reckoning will be hastened by the staging of seed disturbances. The apocalypse will blossom.

'Rejoice! Our times are intolerable' by Jenny Holzer sewn into the back of Lorde’s #GRAMMYs dress pic.twitter.com/Td4z8aoYRC

The 2018 Grammys weren’t just lacking Lorde. They were lacking women in general. Alessia Cara was the only woman to take home an award during the telecast. Cardi B made chart history in 2017 with “Bodak Yellow” but lost both categories for which she was nominated to Kendrick Lamar. SZA was nominated for five Grammys but was also shut out.

Asked about the lack of representation post-show, Recording Academy President Neil Portnow told Variety that women have to “step up,” but didn’t really get into the institutionalized sexism that dominates the industry and often pushes women out, or keeps women bound to contracts with their abusers, like fellow nominee Kesha:

It has to begin with… women who have the creativity in their hearts and souls, who want to be musicians, who want to be engineers, producers, and want to be part of the industry on the executive level… [They need] to step up because I think they would be welcome. I don’t have personal experience of those kinds of brick walls that you face but I think it’s upon us—us as an industry—to make the welcome mat very obvious, breeding opportunities for all people who want to be creative and paying it forward and creating that next generation of artists.

On Friday, Lorde’s mother Sonja Yelich tweeted out a stat from the New York Times citing Lorde as the lone woman nominated for album of the year, and highlighting that over the last six Grammys, only 9 percent of the nominees were women.

this says it all –@nytimes January 26, 2018 pic.twitter.com/R3YdHwieXf

A new study by the University of Southern California’s Annenberg Inclusion Initiative, which was cited in the NYT article, looked beyond the Grammys at 600 top songs from 2012-2017 and found even more disparity. In 2017, only 16.8 percent of artists were women. The study found even less representation for women as songwriters and producers. Study co-author Dr. Stacy L. Smith told NPR:

There are nine male songwriters that are setting the agenda for popular culture across a fifth of the most popular songs over the last six years. Nine men! I think consumers should know this, and I think there should be concern that such a narrow slice of humanity is responsible for and driving our ideas in music.

Exactly one year ago, Lorde tweeted out this statement. The last half of 2017 proved she was right, but there’s still much work to do.