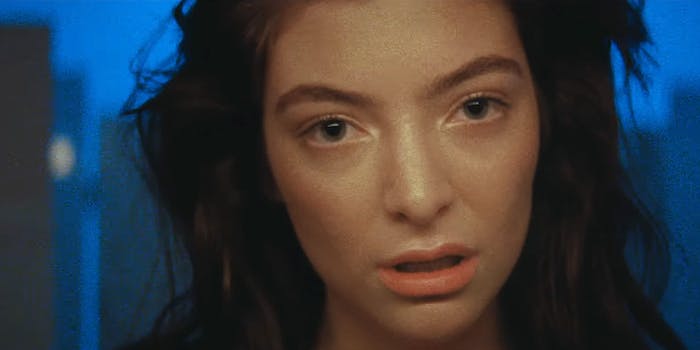 Lorde knew the entertainment business’ day of reckoning would come

Lorde may have only turned 21 last month, but she’s always been a wise and critical thinker.

As the entertainment business purges itself from abusive men—an avalanche that began when numerous women came forward with sexual assault and harassment allegation against mogul Harvey Weinstein—the New Zealand songwriter apparently knew this day would come. In January, she tweeted that “these old men in power have a storm coming, the likes of which they cannot comprehend.” On Wednesday, two months after a series of investigative reports and brave victims brought down many old men in power, Lorde circled back:

Lorde sings about the day-to-day micro-aggressions of disengaged romantic interests with captivating resignation. Her 2017 album Melodrama is essential for its confessional pain, and it’s resonant and captivating for how it depicts the nuance of young people. As the Daily Dot wrote in June: Melodrama is a “cathartic record free of irony or cynicism that forces listeners to confront the heartache of their past with painful clarity.”

Now would be a good time to go back and relisten to uncover what else she was trying to tell us.