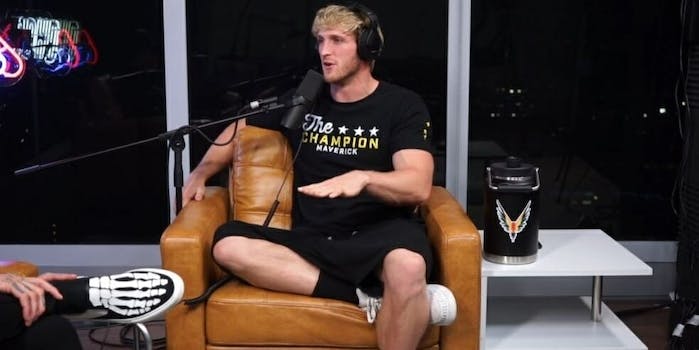 Logan Paul is being mocked for pulling out of slapping competition

'It didn’t give me the feeling I thought it would.'

Though he was set to compete in a professional slapping competition where participants basically slap the shit out of each other until one person falls, YouTube star Logan Paul said earlier this week that he had decided to forgo the event after a traumatizing incident at practice. But his excuses aren’t good enough for some on Twitter, and people who are into performance machismo are now branding him a “pussy” for pulling out.

He originally committed to competing in the “Battle of the Volga” for Generation Iron, but when he abruptly canceled earlier this week, he said in a statement that an incident at slapping practice led him to the conclusion that “I don’t have the desire to participate in an event that can result in serious injury to virtually anyone competing.”

After an unfortunate incident at practice today, I’ve decided not to compete in the Russian Slap Competition. pic.twitter.com/ArC03yvIR2

Sounds reasonable, right? But then Paul tweeted out the incident, where he apparently knocked out a professional slap competitor and then briefly posed for the camera.

“I have never seen a human crumple like that,” Paul said. “Something about the fact he was defenseless made me feel uncomfortable. … You heard the whip crack. He dropped like a sack of potatoes. At first, I was like, ‘Dope, I did it.’”

But Paul said the man looked severely damaged and that afterward, he didn’t remember his name, how he got to Paul’s place, or getting hit.

“I realized I don’t like hitting defenseless humans,” Paul said. “… It didn’t give me the feeling I thought it would. I thought I would feel like, ‘Oh competition, I did it.’ But I felt like a fucking dickhead. Even worse, what if that happens to me? What if I become a vegetable? I have so much to lose, bro.”

After the incident, Paul said his entire team, feeling the “horrible vibes,” determined a slap contest in Russia wouldn’t be a healthy way to spend his time.

“My videographer said that this is that moment where, in Tokyo, you didn’t have someone telling you this is not a good idea,” Paul said, referring to his career-defining incident at the end of 2017 where he filmed and uploaded a dead body in a Japanese suicide forest. “…I’m at the fork in the fuckin’ road, dude. I’ve been at this place before, and I went the wrong way. Now, I’m going to go the right fucking way.”

But that reasoning didn’t impress Vasiliy “Dumping” Kamotskiy, perhaps the most well-known slapper on the planet. The burly Russian told propaganda channel RT that Paul is “a pussy. Tell that to him straight.”

Good that he pussied out, whatever brains he had left in his head were about to be knocked out too.

Even with some of the criticism that’s now being directed toward him, it appears that Paul has thought hard about the potential consequences of doing something just for the content it could produce. He might have disappointed some people by pulling out of the competition, but his decision is probably overall better for his YouTube career.