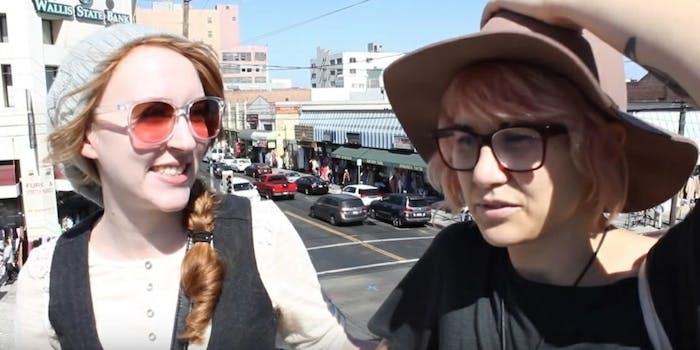 The third leg of the YouTube love triangle has spoken out.

The third leg of the YouTube love triangle between ProJared, Atelier Heidi, and Commander Holly has finally spoken out—and Commander Holly went off on a Twitter tangent Monday night, saying ProJared was in an abusive marriage and that they were terrified of Heidi and feared for his safety.

But Heidi immediately responded, saying Holly and ProJared were conspiring to make her look bad and that they had lied about their affair. It’s yet another chaotic step in what has become a highly personal tale of marriage woes and abuse charges.

The online brouhaha began when Heidi—whose real name is Heidi O’Ferrall—said her husband ProJared (Jared Knabenbauer) and Holly (Holly Conrad) were having an affair this month. In fact, she showed proof that Knabenbauer had blocked her on Twitter and wrote she had “recently learned that my husband @ProJared has been fucking @HollyConrad behind my back for months.” O’Ferrall also claimed he emotionally abused her and said he was soliciting nude photos of his fans (she originally consented to the naked photo swaps, but some fans came forward and said they were underage when they sent him their nude images).

Last weekend, though, Knabenbauer tweeted a statement in which he said he and O’Ferrall had an open marriage of which she approved. He basically blamed her for the demise of their relationship, claimed she was the abuser, and said she had taken several other partners during their marriage. O’Ferrall immediately came to her own defense and said his statement was full of “misdirection and lies.”

On Monday night, Conrad, who has been largely silent during this public struggle, waded into the debate. She said O’Ferrall had used the scandal to give herself 100,000 more Twitter followers and that she was a verbal abuser.

“Leaving an abuser is DIFFICULT. It takes survivors an average of 7 TIMES to leave for good. The months @ProJared tried to separate from @AtelierHeidi were excruciating. I worried about him all the time. He was broken and I was powerless, barely able to even talk to him,” Conrad wrote on Twitter. “If Heidi truly felt that she had to ‘flee’ her ‘abuser,’ would she ever go back to the house of the person she claims abused her? Jared paid for movers, and they’d already finished by then. Survivors typically avoid their abusers out of real fear, the way Jared has, and I have. … @ProJared’s friends, who knew the details of the abuse and had urged him to leave bravely, spoke out to defend him but were quickly vaporized by the one-sided, misinformed hate machine @AtelierHeidi had activated.”

Conrad accused O’Ferrall of bragging about the discord, and she was dismayed that the internet rallied around O’Ferrall. She also said O’Ferrall routinely verbally abused Knabenbauer but that she originally approved of Knabenbauer and Conrad having a sexual relationship.

But O’Ferrall quickly responded with a screenshot from Conrad and saying she was the one who started the “Heidi is an abuser” storyline.

The "Heidi is an abuser" narrative was started by @HollyConrad after I told her that she couldn't have sex with my then-husband @ProJared. She just "lashed out" because she was upset.
Conversation happened February 10, 2018. pic.twitter.com/AQmqZB7mjO

Though O’Ferrall said she wasn’t blameless about the marriage problems, she claimed that she was open and honest with Knabenbauer every step of the way, especially when she realized she didn’t want a polyamorous relationship. Regarding the apparent verbal abuse she inflicted on him, O’Ferrall wrote, “What Holly saw, and the rest of Jared’s friends saw, were my frustrations boiling over after days, weeks, months of silent treatment and neglect from Jared. He broadcasted my frustrations, and acted like they came from nowhere.”

O’Ferrall said Conrad’s Twitter thread on Monday was filled with lies and that she was “exaggerating” and “twisting” details. She also wrote, “But most importantly, the heart of her argument is ‘I was just helping my friend leave ‘his awful wife…. by having sex with him.’”

Since his statement from last weekend, Knabenbaeur has stayed silent on Twitter. Which might be best since it sounds like O’Ferrall isn’t going to stop defending herself.

“I’m gonna keep responding to their lies,” O’Ferrall wrote. “I don’t have anything to hide and I don’t need time to come up with a story. I’m ready to share my truth.”