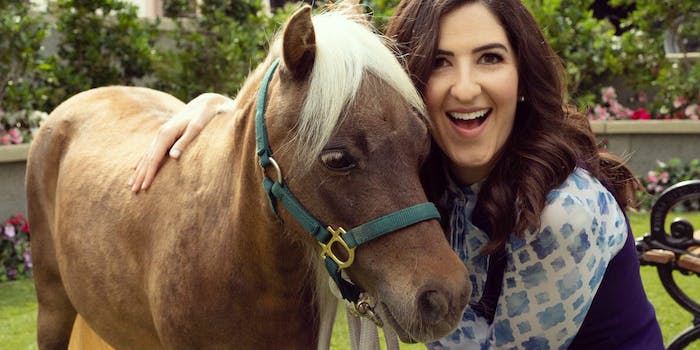 Of course Li’l Sebastian is in ‘The Good Place’

Raise a candle for the very best mini-horse there ever was.

Li’l Sebastian, the beautiful mini-horse that captured the hearts of Parks & Rec’s Pawnee, Indiana, has found a new home, where else but in The Good Place.

The white-maned ungulate appeared in a photo The Good Place actress D’Arcy Carden posted on Twitter Nov. 9, along with the simple caption, “hi.”

If there was any doubt that it was really Li’l Sebastian himself, the official Parks & Rec Twitter account posted Carden’s picture along with the caption “1 like = 1 candle in the wind.” The current count sits at around 26,000 candles, which is 21,000 more than in the MouseRat single that immortalized the mini-horse in song after his untimely (fictional) death.

Li’l Sebastian is the latest of at least a few crossovers between the universes of Parks & Rec and The Good Place, both of which were created by Michael Schur. Previous Easter eggs include the “Swanson Safe Company,” which created the safe that Manny Jacinto’s character Jason suffocated in, as well as a Jean-Ralphio champagne brand. Paunch Burger featured in a season three episode at the Cowboy Skyscraper Buffet.

In an interview with Entertainment Weekly back in October, Schur explained, “It’s fun to do — and because sometimes you need a magazine ad on the back of a magazine, and it’s easier to come up with a fake product and put it in there than it is to clear a real product.”

“I don’t think we’re really trying to say that at some point anyone’s going to be walking down the street and run into Ron Swanson,” he added. “But Parks and Rec had an intense fan base, and we always tried to lay in fun Easter eggs in Parks and Rec for various people … These are little things we like to lay in just for people to enjoy — and to find on a little Easter egg hunt. It’s 99 percent for that reason.

Twitter was thrilled (and perhaps a little concerned) to see Li’l Sebastian in The Good Place. After all, it only took a season for The Good Place to be revealed as the cover for the far more sinister Bad Place.

The real question is does Ben Wyatt / Trevor (@mradamscott) understand how amazing Li'l Sebastian is yet? https://t.co/0taB7TySqG

you mean to tell me li'l sebastian went to the bad place? https://t.co/9jqbtA9HXl

I'm not sure what we're calling the Mike Schur TV universe, but I'm having a stanning breakdown rn. https://t.co/iIkoctz8c7

As sad as it was to see Li’l Sebastian shuffle off this mortal coil, it appears he *might* now find new life in, well, The Good Place https://t.co/7iMmbp3HAs

Hell, as long as Li’l Sebastian is back, we’ll take it.