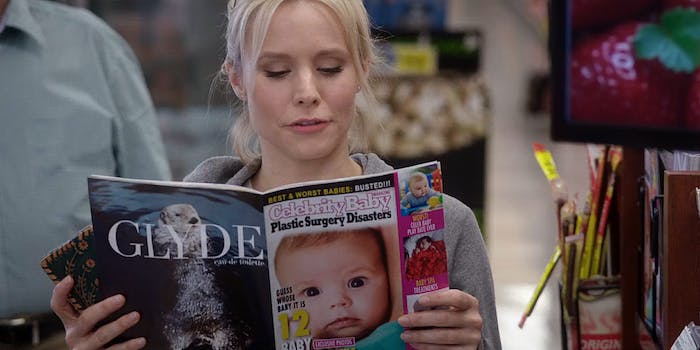 A great Easter egg for fans of both shows.

If you’re active on Twitter, you’ve probably seen a lot of people discussing The Good Place. The NBC comedy show, which follows a group of humans in the afterlife, has a strong online fanbase where memes and screengrabs of the show are regularly shared.

On Tuesday, one fan shared an amazing revelation: The Good Place and Parks and Recreation, another NBC comedy that aired from 2009 to 2015, take place in the same universe.

Just discovered that The Good Place takes place in the Parks and Rec universe and now by whole brain is crying. pic.twitter.com/UjtJLSclrA

Of course, we shouldn’t be too surprised. Michael Schur, the creator of The Good Place, was also a co-creator of Parks and Recreation. But it’s still a nice little Easter egg. The images show Eleanor Shellstrop (Kristen Bell) reading a magazine before she died. On the back cover of the magazine is an ad for a perfume by Dennis Feinstein, a character on Parks and recreation who makes fragrances.

The discovery was retweeted by more than 8,000 people. Fans had a lot of questions about their favorite Parks and Rec characters. Did they go to the Good Place or the Bad Place?

Will characters from both shows cross paths on The Good Place?

If you’ve watched the show, you already know that Adam Scott, who played Ben Wyatt on Parks and Recreation, appears as a demon named Trevor in The Good Place. So if the shows share a universe, does that mean Wyatt went to the Bad Place and became a demon?

Well, we all know why Ben Wyatt is in The Bad Place.

The fictional world of The Good Place (which appears is also the world of Parks and Recreation) has already spread to the real world. Earlier this month, someone tweeted a photo from inside a Blackwell’s bookstore in Oxford, England of a selection of books based on character Chidi Anagonye’s interests.

Once again, if you’re not watching The Good Place, you’re missing out on a lot of internet jokes right now.