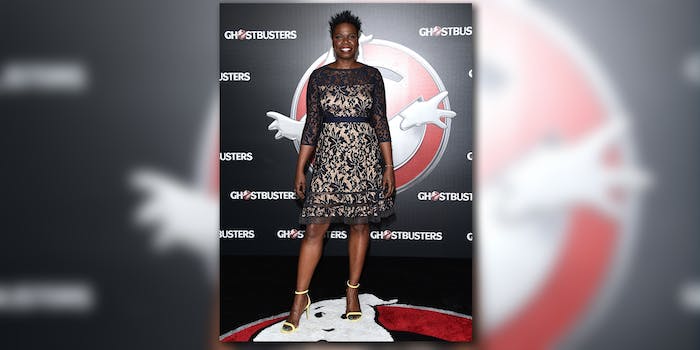 This is what happens when we normalize unacceptable behavior.

The constant struggle between civility and chaos online took a dark turn on Monday, when hackers released stolen nude photos of actress Leslie Jones. The hackers—almost certainly in league with the same degenerates who plagued Jones with racist and sexist harassment on Twitter before the Ghostbusters and SNL star briefly retired from the site—took down Jones’s website before releasing the stolen images alongside her personal data, and replaced the site with a Harambe meme.

In the news coverage of both the Twitter campaign and this most recent act of abuse, websites and other media outlets have struggled to give the act the degree of seriousness it deserves. They consistently invoke the word “troll” to describe the perpetrators or their actions: As if berating a target with racist and hateful speech or stealing her private photos and data were mere pranks by basement-dwelling loners.

The reality is these are acts of abuse and Jones is a victim of a hate crime. The fact that they’ve happened online does not matter, and had someone said or done to her in real life what crowds of criminals have done to her online they would be roundly investigated and arrested. Jones has been personally targeted by a new generation of activated bigots—legitimized by a political and social atmosphere that encourages their hate-filled delusions—and the word “troll” is an act of injustice against her and the many people like her who face regular abuse online.

There is a particularly strong and recent effort to normalize what has long been considered unacceptable behavior. The presidential race has found itself in the gutter more than enough times this year, with Republican nominee Donald Trump letting racist and sexist comments out of his mouth that a more traditional politician would never speak. His popularity, in large part based on “telling it like it is,” is a bid by a societal movement to reject “political correctness.”

Political correctness is painted as a clog in our nation’s collective toilet—rhetorical red tape meant to keep us from confronting hard truth. In reality, however, the majority of people often derided as “social justice warriors” are looking for an honest and rational understanding of how our culture at large—especially speech—targets individuals. The vile and purposeful targeting of Jones by a campaign of hate—an experience all too familiar to many women and people of color online—is one of these effects.

It’s the logical end of attacking political correctness, of praising someone who “tells it like it is” (even when he doesn’t). Many on the alt-right—including Breitbart columnist Milo Yiannopoulos, whose role in leading the campaign against Jones got him permanently banned from Twitter—call their attitude “cultural libertarianism.” This is the belief that culture should be allowed to flow freely without the interference of an oppressive progressive censorship.

People who subscribe to this notion believe they are having their views silenced. Despite having mocked Jones for her race and appearance—as well as posting false and doctored images of Jones posting derogatory content to Twitter—Yiannopoulos believes himself the victim, not Jones. His employer suggested his ban was because of his sexuality—it wasn’t—and Yiannopoulos himself said “Twitter has confirmed itself as a safe space for Muslim terrorists and Black Lives Matter extremists, but a no-go zone for conservatives.” (Yiannopoulos established the Kernel, which the Daily Dot acquired in 2014.)

The argument that fighting the behavior that Jones has been subjected to is censorship is as absurd as it is dangerous. “Cultural libertarianism” paints itself as an intellectual response to a cloistered society, but is largely a method of protecting the very kinds of attacks and abuse that damage the lives of many women and people of color online. They aren’t fighting for their right to free speech, but rather the quickly dissolving privilege to abuse people they don’t like.

As dangerous as elevating this abuse is diminishing it as trolling. Many publications did in the initial wake of the campaign against Jones. Just last week, Time magazine described the effects of abuse in the cover story, “How Trolls Are Ruining the Internet.” While the piece’s author, Joel Stein, aptly details the different levels of abuse and threats people receive online, he also includes harassment, threats, doxing, swatting, and hacking all as different forms of “trolling.”

Doing so both minimizes the pain of victims like Jones and perpetuates abuse as a regular fact of online life. For one, this is not what trolling has meant for most of the Internet’s history. Wikipedia defines an “Internet troll” as any user who “sows discord on the Internet by starting arguments or upsetting people, by posting inflammatory extraneous, or off-topic messages.” A troll is not an agent of any ideology as much as they are a carnival barker—mastering the most deft ways to anger or upset someone.

Going to a music forum and posting the cover of Dark Side of the Moon while declaring it your “favorite Beatles album” is trolling. Sending a comedian pictures of your ejaculate because you didn’t like the Ghostbusters remake is abuse.

The other side of the trolling coin, however, is even more nefarious. As famous as the term itself is the accompanying mantra, “do not feed the trolls.” Since trolls only want attention, goes the conventional wisdom, the best way to reject them is to ignore them. Twitter even offers this in its official guidelines for responding to abuse, suggesting “abusive users often lose interest once they realize that you will not respond.”

The problem with this, however, arises when a website fails to give victims the power to prevent further attacks and generally not take harassment seriously. A lengthy investigation by BuzzFeed recently detailed the inaction by Twitter to prevent the site from becoming “a honeypot for assholes” through “an abiding commitment to free speech above all else and a unique product that makes moderation difficult and trolling almost effortless.”

Which shouldn’t be a surprise for a company wherein actual advice to victims is “ignore it.” Jones took the opposite approach—spending several hours posting her abusers’ names and generally attracting attention to the issue—and, some might say, paid for it dearly with this week’s hack. This victim blaming, however, only puts us further away from dealing with online abuse as an actual problem and refusing to accept it as a necessary evil of online life.

The more we write off hate speech as mere “trolling,” the more we give in to the larger movement to make derogatory and prejudiced ideals a legitimate aspect of public life. The goal of so-called “political correctness” is not to enforce strict codes of conduct to partisan ends—the goal is to prevent the kinds of abuse faced by Jones and many others. The release of her personal data and private property this week represents a dangerous escalation in this conflict, though not a new one. Such abuse does not have to be a fact of online life, and will be unacceptable the moment we all agree it’s unacceptable.