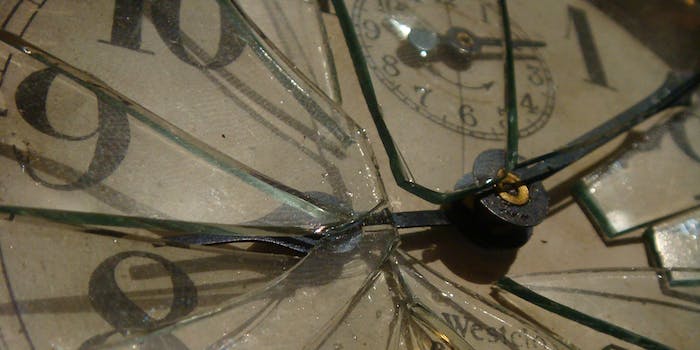 Despite having one of the highest percentages of votes in the poll, she was nowhere to be found on the list.

Ordinarily, a list of influential favorites that includes the likes of John Green and Benedict Cumberbatch would have the Internet ready to throw a party.

Instead, the reaction to the Time magazine’s annual “100” list of the most important people of the year is closer to a bloodbath.

The traditional public voting period for the poll has been rigged in the past, but that’s not the problem this time around. As usual, the editors announced they would select the winners themselves based on reader input. Naturally, many people were thrilled when transgender icon Laverne Cox and Disney princess-turned-Oscar winner Lupita Nyong’o both made the top ten of the public poll results.

Cox, in particular thrilled the Internet by getting almost 92 percent of the vote in favor of her being on the list, and getting the fifth-highest number of votes overall. She trailed only behind Indian politicians Arvind Kejriwal and Narendra Modi and pop stars Katy Perry and Justin Bieber. 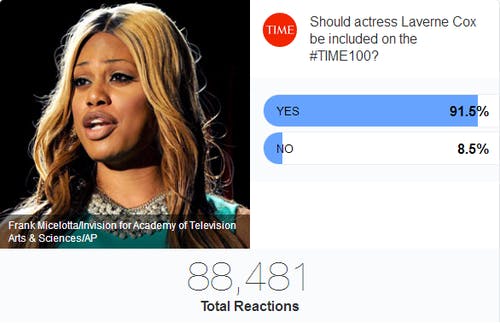 So when the final list appeared yesterday, and Cox inexplicably wasn’t on it, the Internet went up in flames. A Tumblr post that quickly went viral, racking up 44,00 reblogs and notes, said simply, “And then they didn’t put her on the list.” Another one angrily asked: 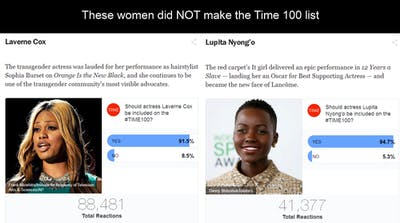 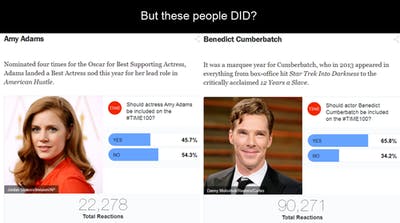 @TIME Where is @Lavernecox in your Time 100 List? She had the highest % of Yes’ and yet no Laverne. Shame on you Time. Shame

Genuinely stunned and disgusted that Laverne Cox was left out of the @Time top 100 after she had so much support. #whereislavernecox

@TIME yeah, but you could have had 43 if you hadn’t excluded Laverne Cox and Lupita Nyong’o… #whereislavernecox #misogynoir #transmisogyny

As always when issues of representation arise, those who were angered that Cox and Nyong’o had been left off felt that the issue was one of the contributions of women of color and trans women being de-valued compared to their white male counterparts. Meanwhile in the anti-feminist corners of Reddit, the general feeling was that Tumblr was overreacting.

“I find it so funny how the tumblrinas are bitching about Benedict Cumberbatch being put on the list for being an actor,” wrote redditor Celot.

“…Who do they think they spent more time post/blogging about: Laverne Cox or Benedict Cumberbatch?”

Your point is well made, Celot. But that shouldn’t erase the necessity of supporting diversity, especially on a list that touts influence and prestige but notably overlooks two of the most influential women of color of the year.

In any case, Cox herself didn’t seem fazed by the snub.

Thanks everyone for all your votes for me for the #Time100. Your love and support means so much more to me than making the list.#lavernehive