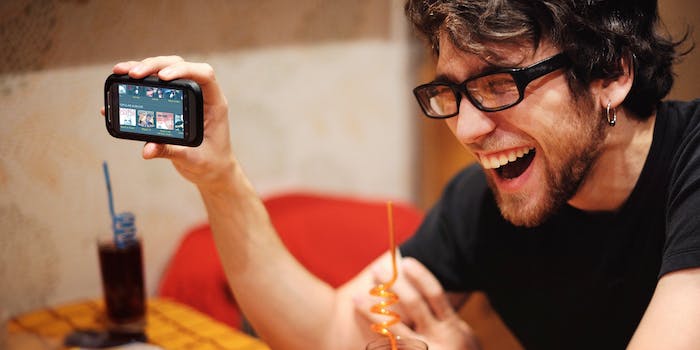 Laugh.ly wants to put streaming comedy in your hands

Laugh.ly debuts today as a mobile app aimed specifically at comedy fans, boasting the licensed work of more than 400 comedians. Its founder and CEO, Dave Scott, is a startup veteran, having previously headed Marketfish and Next Planet Over. He partnered with Funny Or Die co-founder Randy Adams, who got involved because he was impressed with Scott’s vision for a “much-needed channel for streaming comedic content.” He’s helping establish connections with comedians.

Laugh.ly is most reminiscent of Pandora in that it offers channels and guides you to what you might like. But to hear Scott tell it, a comedian inspired the idea for the app—back when he was trying standup comedy. One night he bombed at the Stand in NYC, after following Tracy Morgan.

“Right before I was about to get on, Tracy arrives at the club,” Scott recalls. “As is customary, he bumps me. As is not customary, he stays on stage for 45 minutes and doesn’t leave until midnight. By the time I get on, the audience is worn out. I go on and… crickets. Not even my best material moves the crowd.”

Scott left the club, deflated, but after three blocks Morgan caught up with him and leveled some advice: “Hey, man. Everybody bombs, so don’t give up.”

There’s an obvious demand for comedic programming tailored to the fan—specifically standup, which isn’t a major focus on sites like Pandora or Spotify. Networks like Howl have started aggregating comedy podcasts in an effort to capitalize on the popularity of shows like WTF with Marc Maron; WNYC is creating an arm of comedian-led podcasts. Netflix has grown its original standup specials into a genre, and the demand for comedy programming spilled into a niche streaming site, Seeso, earlier this year. Likewise, Louis C.K. marketed his surprise webseries directly to fans earlier this year.

“Thirty years ago, comedy album sales made up 20 percent of total record sales,” Scott says. “This was the heyday of Eddie Murphy, Cheech & Chong, and even Andrew Dice Clay. But then distribution paths changed. People stopped buying albums and started streaming… Catalogs faltered and access to great comedy shrunk. Access shrunk, but interest never did.” 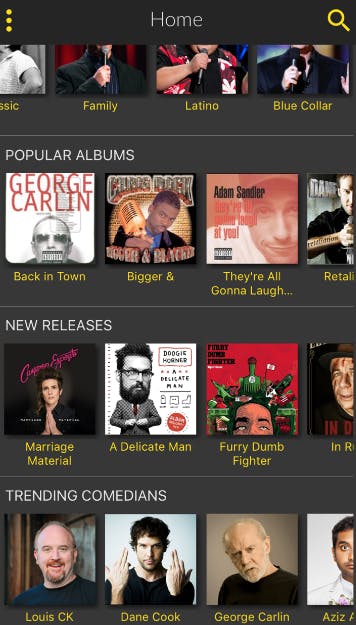 In the leadup to its release, Laugh.ly went through a three-week public beta testing phase, opening it up to feedback and bug fixes. Unsurprisingly, Louis C.K. emerged as the most popular comic, followed by Aziz Ansari and George Carlin. He tops out the Popular Comedians section of the app as well, along with Sarah Silverman, Amy Schumer, Richard Pryor, and Jeff Foxworthy.

Women are represented in the Popular and Trending categories, as well as a Female genre, which is a bit counterintuitive when “female comedian” has become such a tiresome but arguably necessary descriptor. According to Forbes‘ 2015 list, the top 10 highest-paid comedians were all men. Upon its release, the top 10 most popular comedians on Laugh.ly were male as well, something Scott says they noticed “early on” and was “surprising and disturbing,” though, he adds, reflective of the industry. 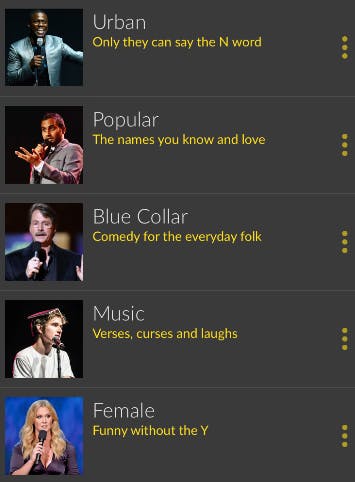 They also have a “proprietary IP” that lets them transcribe and study jokes; when they analyzed profanity in each joke, “blue” humor constituted 90 percent of the material in their catalog. So, men swearing: still popular.

But Laugh.ly is about access for fans and performers. The app allows comedians to upload and get paid for their own work, granted that it’s a professional recording. There’s also access to classic albums that aren’t easily found: An Evening with Groucho, featuring material from Marx’s WWII tour, and Frank Zappa’s The Lost Episodes offer a window into more obscure, foundational content.

“I realized how important comedy is to people and how hard it was to access it,” Scott says. “I also realized that comedians are extremely poor for a very long time. Comedians have no idea how to gain exposure and build audience, making this a hard and unpredictable journey.”