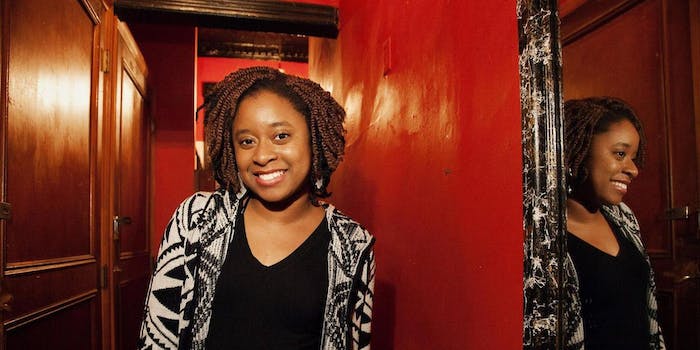 'I think it really grew into a product that represented both of us.'

I first saw Phoebe Robinson perform in summer 2014, hosting Blaria Live!—a show born from her blog, whose tagline is “Seeing the world through the eyes of Black Daria”—at a packed comedy club in the East Village. She was joined by her new co-host, The Daily Show’s Jessica Williams. The lineup she procured was impressive: Comedy legend Janeane Garofalo was headlining. At that show, Robinson and Williams told the audience hilarious stories about their boyfriends (who are white), being women in comedy, and the trials and tribulations of New York City apartments.

A year later, I saw Robinson and Williams perform again, their show now rebranded as 2 Dope Queens, hosted at a much larger venue in Brooklyn. Robinson danced on stage, wearing skimpy overall shorts and a crop top that read “I KNOW GUACAMOLE IS EXTRA.” She told the audience stories of being newly single, going on a wild trip to Las Vegas, and dealing with racist Uber drivers.

Robinson’s career has been on the up-and-up as of late. You Can’t Touch My Hair, her collection of personal essays about race, gender, and pop culture, is coming out in 2016. She’ll also be co-hosting a 2 Dope Queens podcast on WNYC with Williams in the new year. Before that, she was a staff writer on MTV2’s Girl Code and appeared on Broad City and The Nightly Show with Larry Wilmore. You can also see her doing standup all around New York City, live-tweeting Empire and How to Get Away With Murder for Glamour, and writing personal essays and recapping Scandal for Vulture.

Here’s what she had to say about meeting Williams, how Daria inspired her, and how she talks.

The last time I saw you perform, you spoke a lot about your recent breakup. How do you figure what’s OK for you to write about your personal life and what’s not?

In terms of the breakup, I don’t want to make jokes about him because he’s a great person, it just didn’t work out, so I’m very respectful about that. When I joke about how I’m recently single it’s never about him. That’s unofficially off limits to me. Anything else, I’m pretty much down to talk about just because I’ve built my comedy career on being conversational and open about my personal life. If I’m not disrespecting anyone, it’s OK for me to talk about. When I went on [Late Night with] Seth Meyers, so much of my act was about my boyfriend. When we broke up, I had to come up with completely new material. I’ve been trying to put together some stuff about race, especially because the climate in America right now is really tense, so I want to find a way to talk about race that doesn’t feel preachy, but also doesn’t make anyone feel guilty.

So much standup is straight white guys who have a completely different experience to me or you and the fact that we can bring different topics to the table that people maybe haven’t heard talk about in a funny way is a goal of mine.

How did you meet Jessica Williams?

We met a year and a half ago. I was doing background on that piece she did about black hair in the military. I introduced myself and she said, “Oh, I know who you are. I’ve been watching you.” Because she started out doing improv and so did I. She was really nice and sweet, so I asked her to be a guest on my Blaria podcast. When we do the podcast, we really hit it off. She told me she had always wanted to try standup, and I was like, “Well I have my show coming up next week.”

She had never done standup before?

No. But she’s done so much live performance, you can’t tell she hasn’t done a lot of standup. So I asked her to co-host my live show, Blaria. She’s done so much live performing that I was never worried it wasn’t going to go well. We really hit it off and she was serious about it, so it was like, “Let’s keep doing this.” And now we’re doing a podcast with WNYC. I feel like she’s my work wife. We have a very special relationship and I’m really excited to see where it goes.

How does Daria inspire you?

I had had conversations with a bunch of separate people and they had all called me a “Black Daria.” I thought it was funny that people were individually saying that to me. I thought it would be a fun name for a blog and I like to combine words in my regular life like an idiot, so I thought it’d just be “Blaria.”

I started watching Daria when I was in college because I didn’t have cable growing up. It’s such a smart show with a different type of female character. I don’t think there’s been a high school female character like her since. On current shows like Pretty Little Liars, all the girls are polished and look like models who happen to be in high school. Daria was [a] very smart, strong female character. I also relate to the black character Jodie quite a bit. So I wanted to pay homage to the show.

Could you tell me about your new podcast with WNYC?

Jessica [Williams] and I came up with the idea after we did a show at Union Hall. It was one of those shows that just killed. We hadn’t seen each other in a while because we were both traveling and we had so many stories to tell each other and I was like, “Why don’t we do a storytelling podcast? That was so fun.”

At that point we decided to change the name of our show from Blaria to 2 Dope Queens because one, for legal reasons, it probably wouldn’t get cleared, but also because the show had morphed from it being my baby and my idea to Jess coming in as my co-host. I think it really grew into a product that represented both of us. We needed to change the name so it’d feel like ours. We came up with 2 Dope Queens because we’re always calling each other “queen” and we’re always calling things “dope” and there are two of us.

That is the best possible explanation you could offer.

So WNYC has been really amazing and helpful. We’re really excited about it because there are not a lot of podcasts with women of color, especially comedy ones. And the fact that we know so many different types of people—comedians, writers, storytellers, musicians—so we feel like through this podcast we can really expose an audience to different people they haven’t heard of before. Like for a storytelling show we taped for the podcast, we had Lizz Winstead [the creator of The Daily Show], who people have obviously heard of, but she doesn’t do many storytelling podcasts. So it’s great to have this comedy legend tell a super awesome story.

We’ve run into that with our show. We’re doing more festivals now, which is great. It seems literally every time we do a festival, they’ll tell us who’s available to perform in our show, and it’s all white people and one black person who may or may not be a standup. I’m always like, “We cannot be the tokens for the show.” Our show is all about diversity. We have people of color and LGBT people. We want to have all these different types of voices telling different stories. We don’t want seven people who all sound like Marc Maron. And Marc Maron’s amazing. Because there’s more than that in comedy.