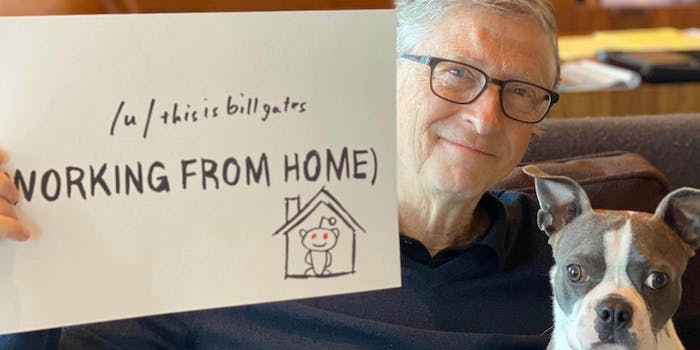 Bill Gates weighs in on coronavirus testing during Reddit AMA

The billionaire discussed everything, from testing failures to vaccines.

Billionaire Bill Gates weighed in on the coronavirus pandemic on Wednesday while hosting a Q&A on Reddit.

The Microsoft co-founder, who recently stepped down from the company’s board to focus on philanthropy, invited internet users to ask him anything relating to the disease.

Gates has long warned about the dangers of pandemics and has spent years investing in health-related endeavors as part of the Bill & Melinda Gates Foundation, which recently pledged up to $100 million to fight the pandemic.

Among the issues Gates discussed on Wednesday included everything, from the lack of widespread testing in the U.S. to ongoing work for a coronavirus vaccine.

The entrepreneur argued specifically that testing remains unorganized, although he expressed hope that the situation would improve.

“The testing in the US is not organized yet,” Gates said. “In the next few weeks, I hope the government fixes this by having a website you can go to to find out about home testing and kiosks.”

Gates was also asked about a recent U.K. report that argued that as many as 1.2 million Americans could die from the disease. Reassuringly, Gates described the parameters of the study as “too negative.”

“The experience in China is the most critical data we have,” Gates said. “They did their ‘shut down’ and were able to reduce the number of cases. They are testing widely so they see rebounds immediately and so far there have not been a lot.”

When asked about why it appeared that the wealthy and famous were being given greater access to testing, Gates argued in favor of bringing testing to the masses through the federal government.

As far as a vaccine for the coronavirus and the belief that such a remedy could be 18 months away, Gates noted that there are currently “6 different efforts going on to make a vaccine.” Once developed, healthcare workers and the elderly would need to be the first to receive them just like testing.

“This could happen before 18 months if everything goes well but we and Fauci and others are being careful not to promise this when we are not sure,” Gates said. “The work is going at full speed.”

The philanthropist added that therapeutic options could become available long before a vaccine, potentially reducing the severity of the disease for some.

“One idea that is being explored is using the blood (plasma) from people who are recovered. This may have antibodies to protect people,” Gates said. “If it works it would be the fastest way to protect health care workers and patients who have severe disease.”

Gates also went on to lay out what his greatest fear and biggest hope is in relation to the coronavirus.

“The current phase has a lot of the cases in rich countries. With the right actions including the testing and social distancing (which I call ‘shut down’) within 2-3 months the rich countries should have avoided high levels of infection,” Gates said. “I worry about all the economic damage but even worse will be how this will affect the developing countries who cannot do the social distancing the same way as rich countries and whose hospital capacity is much lower.”

While the U.S. currently has 7,769 confirmed cases, the number is expected to continually spike as more testing becomes available. In total, 214,894 cases have been observed across the globe with at least 8,732 deaths thus far.