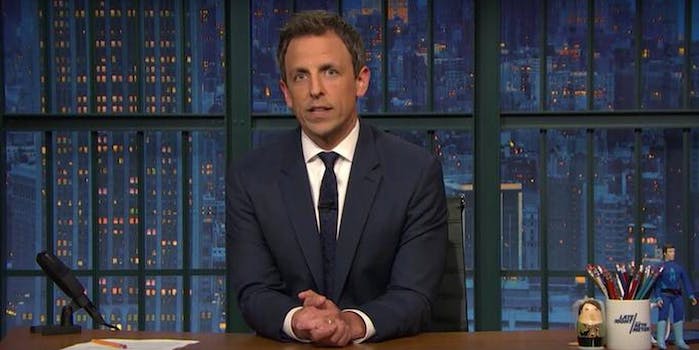 'We’re shocked, we mourn, we change our profile pics, and then, we move on.'

In the wake of the deadliest mass shooting in American history, Americans once again looked to late-night television for a sense of comfort and catharsis. And like President Obama, some hosts are starting to notice how similar these addresses sound.

The shooting at Pulse, an Orlando, Florida, gay nightclub, occurred early Sunday morning, so most late-night hosts had to wait until Monday night to address their respective audiences with the exception of John Oliver, whose show airs on Sundays, and James Corden, who opened the Tony Awards with a message on behalf of the entire theater community in a show dedicated to the victims of the Orlando shooting.

“Hate will never win,” Corden said. “Together, we have to make sure of that. Tonight’s show stands as a symbol and a celebration of that principal.”

Some were at a loss for words as they talked about the violence that occurred in Orlando, showing vulnerability—they’re just as lost as the rest of the country. In the middle of offering his thoughts, Jimmy Fallon wondered, possibly like many parents, how he was going to eventually tell his kids about Orlando. He didn’t call Pulse a gay nightclub, but he spoke against the idea that it’s OK to kill people for their differences.

“We need to get back to being brave enough to accept that we have different opinions, and that’s OK because that’s what America is built on,” Fallon said.

But many of them got angry. They were more explicit about the LGBT community being directly affected by this. They’ve seen this happen too many times and while they offer their condolences, they’re also using their platforms to call for change. They want the government to do something about it besides offer “thoughts and prayers” before the next mass shooting occurs.

Conan O’Brien is the most seasoned host on TV, and he’s had to do numerous addresses over the years. He’s mostly kept his thoughts out of it, but this time he called for a ban on semi-automatic assault rifle sales. (The gunman legally purchased an AR-15 one week before the shooting even though he was under investigation by the FBI twice for connections to terrorism.)

“I’ve tried really hard over the years not to bore you with what I think,” O’Brien said. “However, I am a father of two, I like to believe I have a shred of common sense, and I simply do not understand why anybody in this country is allowed to purchase and own a semi-automatic assault rifle. It makes no sense to me. These are weapons of war, and they have no place in civilian life.”

Samantha Bee, who debuted on Full Frontal just a few months ago, is on the other end of the spectrum and hasn’t had to do many of these on her show yet. But she’s a longtime veteran of The Daily Show, and she’s had plenty of exposure to those stories over the years. Her response was raw as she called out Florida Gov. Rick Scott for telling people to pray instead of attempting to change how Florida does background checks on gun purchases and access to semi-automatic rifles. (There is no waiting period to purchase one under Florida law.)

“There is no shortage of troubled 20-somethings out there, and whether they’re radicalized by ISIS, or homophobia, or white nationalism, or a dislike of movies, we are making it far too easy for their derangement to kill us,” Bee said. “So until we as a nation find the political will to reject a mass shooting per day as the price of freedom, I’m just gonna pray.”

Seth Meyers tried to make sense of all through one of his “Closer Look” segments. He praised the heroics and the hundreds of people who waited hours in line to donate blood, predicted an ugly debate on gun control, and tore into Donald Trump, who called for congratulations after the shooting.

“So while there were some who were busy callously exploiting the tragedy to spread bigotry and misinformation, let’s keep in our hearts the victims and applaud those acts of love and humanity that poured forth in Orlando and across the country,” Meyers said. “Because at the end of the day that’s what will endure.”

Trevor Noah, who’s already had to make numerous of these addresses in the nine months since he took over The Daily Show for Jon Stewart (who had a particular knack for saying what people needed to hear), pondered if Obama had ever thought he’d have to give so many speeches about mass shootings during his presidency. Obama asked if this is the country we want to be, and Noah pointed out that we already have an answer.

“This is exactly the kind of country it wants to be,” he said. “Because we know how this always plays out. We’re shocked, we mourn, we change our profile pics, and then, we move on. It’s become normal, but I’m sorry. Maybe it’s because I’m new, but it’s not normal, and it shouldn’t be normal. We shouldn’t allow this to be normal.”

Larry Wilmore offered his condolences as well, but he turned his attentions to Trump, who he felt was taking advantage of the Orlando shooting with his anti-immigrant and Islamophobic rhetoric, and Scott, who didn’t mention that the mass shooting took place at a gay nightclub.

“Politicians will tell you this was an attack on American freedom,” Wilmore explained. “But let’s be very clear, it was first and foremost an attack on an American minority group. The deadliest mass shooting in American history specifically targeted a gay night club. Not only during pride month, but on the eve of the gay Super Bowl.”

Stephen Colbert zeroed in on the overwhelming feeling of familiarity when it comes to mass shootings.

“It’s as if we have a national script we have learned, and I think by accepting the script we passively accept that the script will end the same way every time—with nothing changing, except for the loved ones and the families of the victims for whom nothing will ever be the same. It’s easy, it’s almost tempting to be paralyzed by such a monstrously hateful act, to despair and say, ‘Oh, this is the way the world is now.’ Well, I don’t know what to do, but I do know that despair is a victory for hate.”

He happened to have Bill O’Reilly on Monday night, so the duo went toe-to-toe on guns and what was to blame—and he even got O’Reilly to admit that Trump would take advantage of Orlando. A minor victory in a sea of seemingly hopeless debates for these hosts.