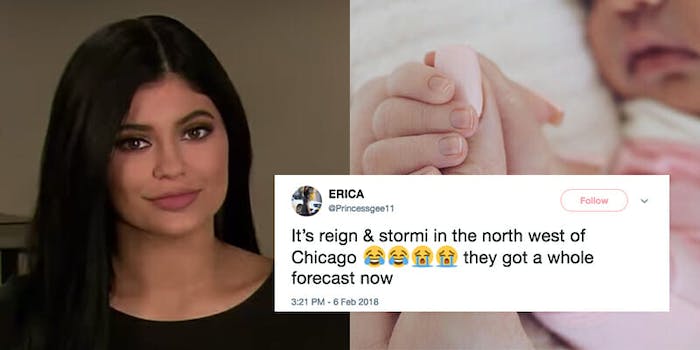 But what about Mariposa?

Kylie Jenner took to Instagram on Tuesday to at last reveal that Stormi is the name of her first child with Travis Scott, putting an end to days of fans’ guesswork. Jenner, 20, gave birth to a baby girl on Feb. 1.

She revealed the birth via Instagram on Feb. 4 after months of speculation—and even demands of an announcement—from fans that she was pregnant. In another post, Jenner shared an 11-minute video called “To Our Daughter” from her and Scott that shows intimate moments leading up to Stormi’s birth.

After Jenner revealed her baby’s name, the internet—ahem—stormed in with jokes. Many of them were weather-related puns on the new kids’ names in the Kardashian/Jenner clan.

Kardashian/Jenner family gatherings will sound like a weather report when wrangling the kids. Is it Stormi? Naw it's just Reign Over by North Chicago. pic.twitter.com/Qcv3jLy8Cq

Some fans were bewildered because many had theorized Jenner would be naming her baby Mariposa (Posie for short!) or something else butterfly related. Many thought Jenner was hinting at the name with clues in her pregnancy video, like shots of her butterfly necklace and nursery decorations.

Everyone was so certain Kylie’s baby was gonna he called Butterfly but she threw a massive curveball and named her Stormi. pic.twitter.com/34K6EPeZyB

Imagine the entire nation coming together to devise the butterfly theory behind Kylie Jenner’s baby just for her to turn around and call it STORMI???? R u 4 real

The baby’s aunt, Kim Kardashian West, celebrated the announcement with the most fitting emoji.

No matter her name, there’s no doubt that Stormi will lead a privileged life.