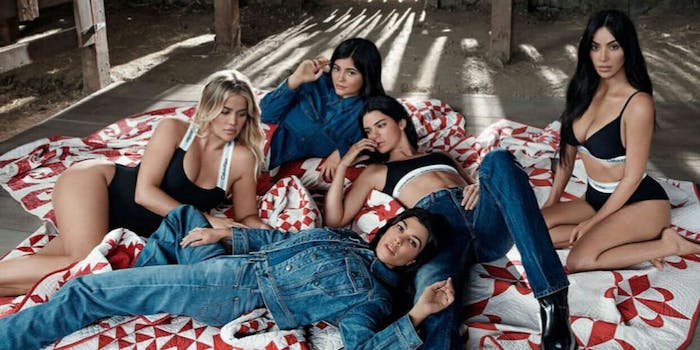 The internet has been ablaze since Calvin Klein announced Monday morning that it’s chosen the Kardashian-Jenner sisters for its latest campaign ad.

The brand put a rustic spin on the otherwise glamorous ensemble and had the photoshoot take place inside a barn, which was located at a secret spot in Los Angeles. Other celebrity families previously featured in the campaign include A$AP Mob.

For Kim Kardashian West, the ad symbolizes the group’s commitment to family, according to Vogue.

“Family is everything, so when we’re all together doing something special like this, it means so much.” she told Vogue. “We’re definitely a modern family, and Calvin Klein embodies Americana.”

Nothing better than working with my family! Honored to be shot alongside my sisters for the new CALVIN KLEIN UNDERWEAR & CALVIN KLEIN JEANS global campaign. Thank you @calvinklein – Our Family. #MYCALVINS. #ad pic.twitter.com/HLMAhytgox

Speaking of family, fans on Twitter speculate that the ad campaign proves the Kardashian-Jenner clan plans to grow more this year. The sector of the Kylie Jenner fanbase convinced that the 20-year-old is hiding a pregnancy believe the photos of her in the Calvin Klein campaign are evidence that she is with child. According to them, the fact that Jenner wrapped herself up in a blanket for the shoot proves she’s trying to hide a baby bump.

So the entire Kardashian fam does a Calvin Klein shoot. Who’s covering up their stomach? Kylie. Girl, if you’re having a baby, I don’t care. I want you to be happy!

Not that I care or anything…. but the new Kardashian x Calvin Klein ad made it super obvious that Kylie is pregnant pic.twitter.com/Az5cHOxICU

Fans have been waiting rather impatiently for a confirmation from Jenner about her possible pregnancy. Back in December, many were dismayed when Jenner didn’t use Kardashian West’s 25 days of Christmas photos as an opportunity to make the announcement. Now, she hasn’t posted anything to social media in a little over a month.

But even if the Calvin Klein ad doesn’t make it clear Jenner is pregnant, if she is it will get harder to hide the news.

It’s only a matter of time before Jenner fans get answers.