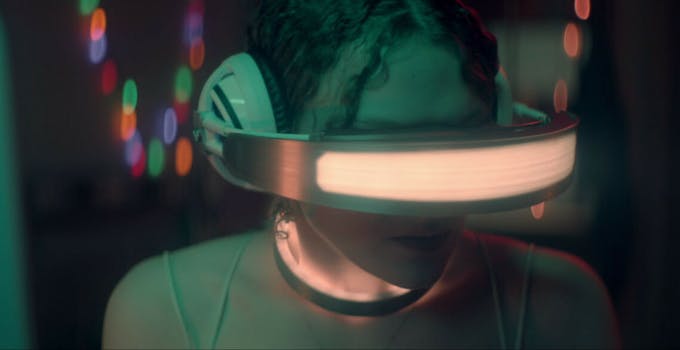 From the mind of Skins co-creator Bryan Elsley and Lottie Moggach’s book, Netflix short series Kiss Me First is a genre-confused, saccharine-sweet affair. Though not afraid to openly expose its apparent influences—Black Mirror, The Matrix, Ready Player One—it somehow locates few of the authentic essences from which its borrowed.

However, there are redeeming portions. The talented Tallulah Haddon stars as Leila, a lonely young English woman that’s just lost her mother. “Got friends coming over?” asks a concerned nurse to the teenager, as helpers clear the flat of personal effects. Leila answers to the affirmative, though her “friends” reside in her other realm: the cyberworld of Azana.

The wonderous Azana is where Leila becomes her avatar Shadowfax, but it’s also a place of apparent violence, where similarly afflicted souls come to escape, rage out, or otherwise free their minds from real chaos.

At the start, the adaptation of Moggach’s novel seems to take a Mirror tack, showing fragile and troubled characters taking solace in the unreal. Within it, significant questions are implicitly asked, such as whether true healing for their real-life pains can be found through virtual reality. This is particularly true with Tess (Simona Brown), a bipolar siren in an abusive relationship. Via her psychologist (Ben Chaplin) there are initial attempts to suture up her the wounds from her emotional trauma.

There’s no pain (or physical pleasure) in the virtual world, which is a Dollar Store version of the environment in Spielberg’s Ready Player One, unless you’ve got one of the prohibited sensory bands created by the mysterious Adrian (Matthew Beard). He’s also built up a hidden cult called Red Pill, a Matrix reference describing the real within the unreal for selected, hyperintelligent vagabonds.

After Tess’ disappearance, Laila takes on her virtual mask and follows a half-formed rabbit-hole where her character arc grows more confident. It’s better than can be said about the uninteresting villains—the Red Pill’s negative conditioning and emotional gaslighting run flat.

Atop the underdeveloped characters in Kiss Me First, problematic gapping asks the viewer to trust their way through the mash. There’s no direct reasoning to why anyone involved, save Tess, is necessary to the advancement of the plot, or why Adrian is keen on Laila. More frustrating, there’s no treat for your patience as the series features an incoherent climax with inexplicable and superfluous scenes. By the end, you’ll be ready to take off the VR helmet.