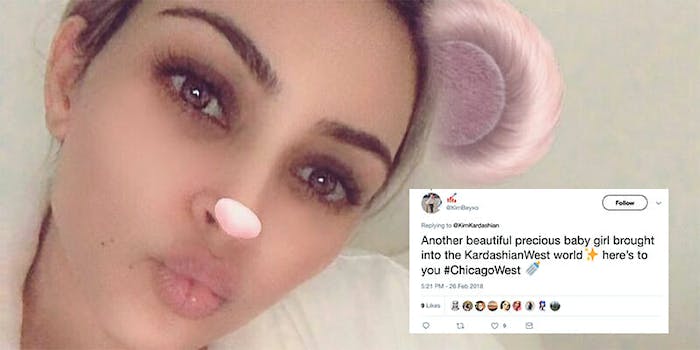 The photo shows Kardashian holding her infant daughter; a Snapchat filter gives them both fuzzy pink ears and pink noses.

Chicago is Kardashian and her husband Kanye West’s second daughter. Their other children are North West, 4, and son Saint West, 2.

you have such beautiful babies kim

Chicago was born on Jan. 15. Kardashian, 37, was very open about her complications through her previous pregnancies and the couple’s decision to have their third child via surrogate.

This year has been a baby boom for the family of reality stars. Kylie Jenner, 20, gave birth to baby girl Stormi earlier this month. On Monday, People reported that 33-year-old Khloe Kardashian’s expected baby with NBA star Tristan Thompson will be a boy.