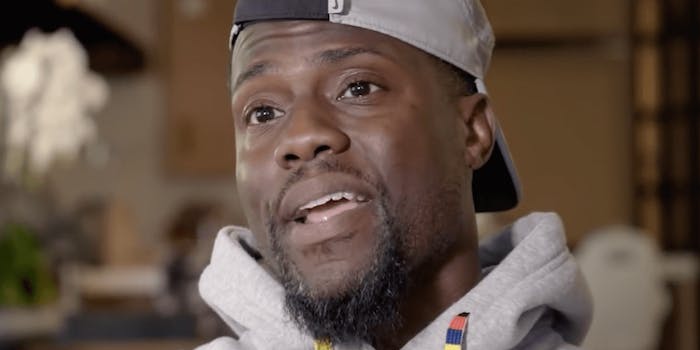 The comedian reflects on his mistake in a new Netflix documentary.

Comedian Kevin Hart recently released a documentary series on Netflix, Kevin Hart: Don’t F**k This Up, where he finally concedes that he insufficiently managed his homophobic tweet debacle. The ordeal led directly to his stepping down from hosting the Academy Awards in 2019. (The fact that the series exists, and appears to be something of an image-building mechanism, could be seen as problematic. The handling and discussion of his cheating scandal, documented in episode three, is particularly cringeworthy.)

This docuseries is proof of that – Kevin Hart literally handled the Oscar situation & addressing of his violently homophobic jokes and tweets in the absolutely WORST way… and got PAID to make a docuseries about it. pic.twitter.com/D7vuf8LYLt

Hart had been tapped to host the 2019 Oscars right up until a series of homophobic 2011 tweets of his were uncovered. The immediate backlash, and his outright refusal to simply apologize to the LGBTQIA community for the tweets, eventually grew to epic proportions.

Additionally, he quipped: “Guys, I’m almost 40 years old. if you don’t believe that people change, grow, evolve as people get older, I don’t know what to tell you.”

Throughout, he went directly against the advice of his executive team and even his close-knit friend group. He went on Ellen, and subsequently a whole apology/non-apology tour.

In episode six, “The Kingdom of Kevin,” he first expresses confusion on what his approach should be in the course of promoting The Upside. His co-star Bryan Cranston opted out of touring with Hart.

Hart, though, then explains his adjustment to the situation, via an anecdotal conversation he had with film director and Empire producer Lee Daniels, who is gay. He says Daniels explained to him that “it’s not about the apology; it’s about you saying that you don’t condone violence (against members of the LGBTQIA community). And that’s when the light bulbs really started going off.

“I missed an opportunity to say simply that I don’t condone any type of violence… for being who they are,” he adds.

The episode delves into his relationship with a gay woman, Hartbeat Productions executive Carli Haney. It shows how her voice illuminated Hart’s change.

Near the episode’s close, Hart also touches on his ego and his need to veer away from constantly standing his ground in situations not calling for defiance.

“I’ve been right a lot; but when you’re wrong, it gonna hurt because you’re going to look back and say, ‘fuck, I should’ve listened.'”

The full season of Kevin Hart: Don’t F**k This Up is out on Netflix: