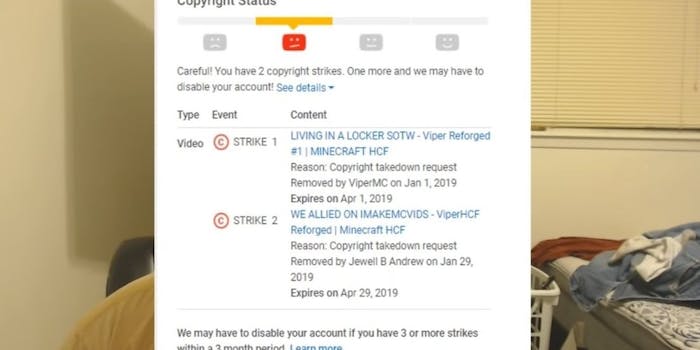 2 YouTubers say their channels were threatened by an extorter

YouTube has come under immense criticism lately for allowing people or companies to claim somebody else’s work as their own. But an even more disturbing charge has been levied by two gaming YouTubers who say their channels were at risk of termination due to a third party who was extorting them.

YouTubers ObbyRaidz and Kenzo made separate videos in the past two days that share similar stories. Their channels were given two copyright strikes by the same person, and they were both threatened that the same person would strike them again, which would lead to the termination of their channels. Their only option to save their channel, both said, was to pay this person through Paypal or via Bitcoin.

“I’ve been striked twice and basically extorted,” said ObbyRaidz, who has about 6,000 subscribers, in a video. “If I don’t pay this dude, he’s going to strike a third one of my videos.

Meanwhile, Kenzo, who has about 60,000 followers, wondered, “Me being a gaming channel, it’s kind of strange how I’ve gotten two strikes. What content could I have infringed here?

Three copyright strikes in a period of three months could lead to a channel’s deletion. On Twitter, YouTube told both creators that their channels would not be deleted (in response to a Daily Dot request for comment, a YouTube spokesperson referred to the platform’s tweets).

“These takedown notices were abusive, we have zero tolerance for the submission of fraudulent legal requests, so we also terminated the channels that submitted these,” YouTube said in a tweet.

Appreciate you bringing this to our attention – both strikes are resolved and the videos reinstated. Upon review, these takedown notices were abusive, we have zero tolerance for the submission of fraudulent legal requests, so we also terminated the channels that submitted these.

In his video, ObbyRaidz showed a message he received from somebody calling themselves Vengeful Flame. That person ordered ObbyRaidz to pay $150 to them on PayPal, or $75 worth of Bitcoin, for the copyright strikes to be cancelled.

“If you decide not to pay us, we will file a third strike,” the message read. “We’ll give you a very short amount of time to make your decision.”

ObbyRaidz then tweeted about the message.

“Hey, we saw you tweet about us,” Vengeful Flame said in another message. “Not sure why you thought that was a good idea or if you thought you would remotely get any help, but this has violated any potential deal. Enjoy your third copyright strike.”

Now that YouTube has stepped in, that won’t happen.

Kenzo had a similar story. Vengeful Flame ordered him to pay $600 via PayPal or $400 in Bitcoin and said they were paid by somebody else to strike him.

YouTube also removed his strikes, saying in a tweet, “We confirmed that this takedown notice was (obviously) abusive. The strike on your channel is resolved and the video is reinstated. This is an example of a fraudulent legal request, which we have zero tolerance for, so we also terminated this channel.”

Appreciate your patience —we confirmed that this takedown notice was (obviously) abusive. The strike on your channel is resolved and the video is reinstated. This is an example of a fraudulent legal request, which we have zero tolerance for, so we also terminated this channel.

YouTube has also dealt with controversy involving the copyright claim system, which is not the same as a copyright strike. The copyright claim system allows a third party to take a creator’s ad revenue by simply saying the YouTuber had violated the flagger’s copyright. It’s affected well-known YouTubers including TheFatRat, AngryJoeShow, Smelly Octopus, Star Wars Theory, and Dash Cam Owners Australia.

YouTube in the past has told the Daily Dot that it has teams dedicated to stopping potential copyright claim and copyright strike abuse and that it won’t hesitate to bar an abuser from the site. But there are still plenty of problems.

“The YouTube copyright system is completely broken,” Kenzo said in his video. “It needs to stop.”