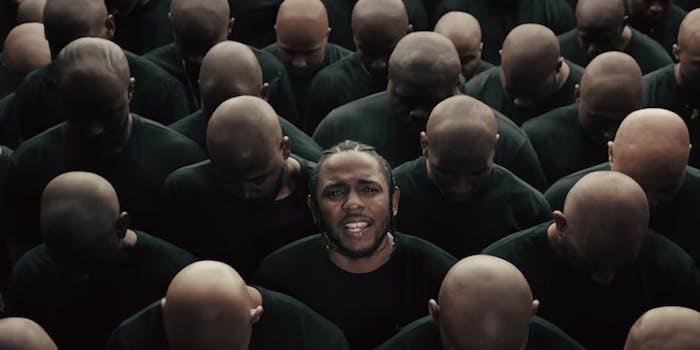 Yes, Kendrick Lamar is the greatest rapper of all time

He's got the belt.

Following the release of last month’s DAMN., Kendrick Lamar’s fourth straight stellar album, there’s been massive discussion about the Compton, California, wordsmith’s credentials as the greatest rapper of all time. That’s, well, because he is.

Rap music fans turned barbershop historians, like sports fanatics, have long argued their “top five, dead or alive” artists. Lamar has barged his way into the conversation, firmly planting his stake. It’s a case that’s become easily justified, as his combination of technical skill and relatability place him at rap’s peak.

All of this matters because hip-hop’s entire program is built around competition. Short the increasing dissipation of historical contextualization of rock bands, in no other genre is the fascination of who has the belt so hotly contested and agonized over.

In terms of modern contemporaries, Lamar has one rival: Since 2011 he’s been locked into a cold war with Toronto superstar Drake, whose immense global popularity through sales and smash hit singles is unquestioned. On Sunday, for example, he won a record 13 Billboard awards, beating Adele’s previous mark. Though Billboard isn’t an indicator of critical greatness, there’s no doubting Drake makes music that resonates with the masses. Drake. Sales. Check.

As with Lamar’s previous work, DAMN. continues his elevation of the genre with expansive production and crossover collaborators (see: Bono). It pushes sociopolitical matters onto much larger platforms, and raps to the moon and back. Heck Drake didn’t even write large chunks of his own rap verses, enlisting a night club’s guest list of co-songwriters. DAMN.’s universal acclaim confirms what media and industry veterans have felt for years.

Justin Hunte, former editor-in-chief of respected HipHopDX.com, laid out an impressive case for Lamar last year. He recalls Lamar’s current and historical rivals’ claims to the title, cases that began around their fifth and sixth albums.

New York radio station Hot 97’s Peter Rosenberg stated his own impassioned case, which necessitated whiteboard-charting Lamar alongside other contenders. He admitted that privately he believed Lamar already wore crown after 2015’s world-stopping To Pimp a Butterfly, but felt he couldn’t espouse these thoughts, as to not incur the wrath of Twitter.

Like the Verge wrote after the release of To Pimp a Butterfly: “It would be foolish to even discuss it publicly. We need more evidence. More albums. More time. But deep down, we know. Kendrick Lamar could be the greatest rapper of all time.”

Stacking and measuring Lamar’s catalog alongside other great MCs provides some clarity. Jay Z, his closest historical rival, has the most formidable catalog as a solo artist. He has three classics: 1996’s Reasonable Doubt, 2001’s The Blueprint, and 2003’s The Black Album.

Whether you count Lamar’s 2011 Reagan-centric Section. 80 or (major label debut) good kid, M.A.A.D city as his first proper album, either ranks as one of the strongest debuts in rap history, based on resolute substance, timeless storytelling, and continued replay value. Though today Jay’s Reasonable Doubt is spoken of in glowing terms, it wasn’t universally loved upon its release in 1996, a banner year stacked with excellent drops from Nas (It Was Written), Tupac (All Eyez on Me), and OutKast (ATLiens).

The truth is that Jay’s debut benefits from internet hindsight—such as XXL magazine’s retrospective “XXL” ranking of it—muddling the collective memory of its initial reception. Proper recall shows Wu-Tang Clan member Raekwon’s 1995 Only Built 4 Cuban Linx was an influential precursor to Reasonable Doubt. At the time Jay Z was made fun of, and even called a biter of Biggie’s style.

Jay and Lamar overlapped on a remix to “Bitch Don’t Kill My Vibe,” and Lamar embarrassed his elder. Lamar hasn’t lost a head-to-head lyrics battle, and short a subliminal slide, no rapper has gone out of their way to create one with him.

Lamar knows that to be the best, a rapper must regularly seek out competition. Check out his body bag of features where his performance stamps out the original artist, and leaves him in the dust: Big Sean (“Control,” “Holy Key”); Rick Ross and his entire crew (“Power Circle”); Talib Kweli and Curren$y (“Push Thru”); Drake (“Buried Alive Interlude”); and Travis Scott (“Goosebumps”).

Who does that leave with the resume to be considered the greatest? Eminem’s technical prowess is clear, though his material largely gazes inward. The Detroit star has sold more than 155 million albums, the most ever for a rapper. But 2000’s The Marshall Mathers LP is his lone certifiable classic, and his work since 2002 has been spotty and often terrible. Rakim is the best of the golden age, reinventing the wheel in terms of how to rap with calm charm that countered Chuck D. and Run-DMC’s yelling, but released nothing of note as a solo artist following his split with Eric B. in 1992.

Biggie’s life and career were cut short. Though arguably the most influential rapper ever, Tupac would never be called technically proficient, with his simplistic patterns and limited vocabulary. Nas, who’s releasing new music in 2017, has been chasing the ghosts of Illmatic since 1994 and has yet to match his debut’s highs. Andre 3000 has never put out a proper solo album.

Kanye West ranks as a special case, as he’s clearly had the greatest overall career. His deep, acclaimed, and high-selling catalog ranks as one of the best ever, in any genre. But we can’t count West as a great rapper, simply on the basis of his pervasive ghostwriting and production co-opting—which he’s never hidden, to his credit. West is a man of ideas, and incredible musical talent, but he’s not a great lyricist.

Hip-hop’s ultra-competitive core appeal pitches the genre as a spectator sport. Similar to LeBron James versus Michael Jordan polemics, the debate on whether Lamar is the greatest or not is as much about the debate itself, as the men involved. We’re constantly marveling at those who can touch clouds.

If your favorite rapper from the ’90s stands in for Jordan in this analog, then Lamar is at least James. Just as Jordan passed the greats before him only to see King James in his rear view, Jay Z may be confidently counting his coffers, but he’s surely hearing Lamar’s footsteps.

Then, Lamar will hear someone else’s, and we can look into remaking this list.